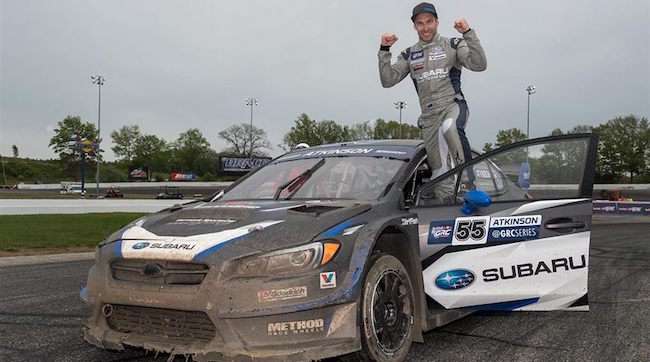 It was a busy weekend for Subaru Motorsports and the Subaru WRX STIs as Chris Atkinson gets his first GRC podium, and David Higgins scored a win at STPR. The big news for SRTUSA is the progress they made this weekend at Red Bull Global Rallycross double-header at New England.

Day one at the Thompson Speedway Motorsports Park saw improvement for Subaru, as both WRX STIs made it into the Final. Chris Atkinson started in the second row and Patrik Sandell in the 4th row. Atkinson got pushed out to the tire barrier and had to do a donut to get back onto the track, while Sandell got bumped hard but managed to stay on track. Sandell finished in 6th place and Atkins drove to a 7th place finish. It was dominated again by the Volkswagen Beetles of Tanner Foust and Scott Speed.

A podium for Subaru in Round 4

Day 2 of the double header produced much better results for the Subaru WRX STI GRC Supercars. Subaru’s WRX STI Global Rallycross cars battled hard in the semi-final where both drivers started on the back row, yet managed to gain several positions and finish 2nd and 3rd. This set up both Atkinson and Sandell on the second row for the Final. Foust, Arpin and Speed were on the coveted first row.

Atkinson managed to immediately gain a position and put his #55 WRX STI in third place. The Australian held the position for the remainder of the race and got his first GRC podium. Patrik Sandell drove an equally clean and precise race finishing in 5th place after 10 intense laps. Steve Arpin and Scott Speed finished first and second respectively. It was huge for Subaru to finally get a top-three finish. The team has struggled with reliability issues until this weekend.

It was another good weekend for David Higgins and Craig Drew as they claimed their 7th win and 9th podium at STPR Saturday in Wellsboro, Pennsylvania. It was Travis Pastrana’s least favorite rally and he struggled by glancing off a tree and nearly going off one stage two times.

There was more trouble for Pastrana on Stage 12, Randal II, where he and Durant went off course and got a flat that resulted in them giving up almost three minutest to Higgins and Drew in the #75 WRX STI. With a secure lead, Higgins just had to clear the grueling 24.49-mile Mine Hole stage to claim victory at STPR.

Red Bull Global Rallycross action continues in another double-header event less than two weeks away. The next GRC race will be held in Ottawa, Canada on June 14-16 at the Canada Aviation and Space Museum. Subaru hopes they can have even more success in Atkinson’s #55 and Sandell’s #18 2017 Subaru WRX STI Supercars. Stay tuned.

For Some Former Daimler Managers Daimler Is Authority, While Tesla Is Like a Startup
How Daimler Unintentionally Subsidizes Tesla Giga Berlin
END_OF_DOCUMENT_TOKEN_TO_BE_REPLACED