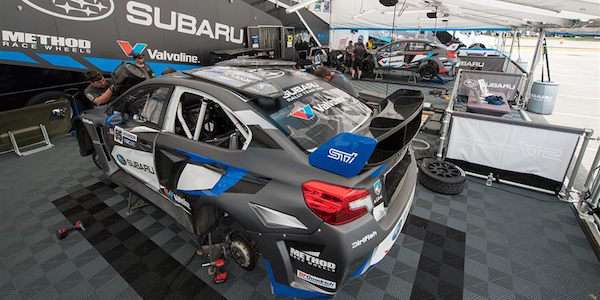 Both Subaru WRX STI Global Rallycross cars missed the Final in Sunday’s Round 2 action. What happened to Subaru?
Advertisement

It’s hard to compete when both Global Rallycross cars are sitting under the service tent and their not out on the tarmac. Both Subaru WRX STIs were out of the running and could’t even compete this weekend at Round 2 Red Bull Global Rallycross in Louisville, Kentucky. This was the first time the GRC cars were in Kentucky and it was the shortest track on the circuit at .7 tenths of a mile. The track also had one of the bigger jumps and it put a major hurt on both Subaru WRX STIs.

While the other GRC teams, Volkswagen, Honda and Ford didn’t seem to be affected by the jump at the short Louisville, Kentucky track, both Subaru STIs were knocked out of the action this weekend. SRTUSA's GRC Supercars were sitting under the service tent during the two Semi-Final Heat races and they also missed the most important race, the Final.

Patrik Sandell, when interviewed by NBC Sports reporter Will Christien, said both WRX STIs were having rear suspension problems because of the landing on the jump. Subaru later said, “The massive jump and subsequent hard landings were causing unforeseen issues with the suspension. With limited time available and a tight schedule, SRTUSA engineers were unable to resolve the issue.” Subaru techs worked frantically, but couldn’t get either car ready for the Semi-Final or the Final race. It was a disappointing day on Sunday for SRTUSA as both cars finished in 4th place in the first two heats, and both in 5th place in Heat 3 and 4.

Even with the cars in the heat races now starting 5 wide, the Subaru WRX STIs seemed slower off the line than the faster Volkswagen Beetles, Honda Civics and Ford Fiesta. When they get caught in traffic, the Subarus struggle to get the inside line and were pushed around relentlessly.

In the 10-lap Final, it was a photo finish as Sebastian Eriksson’s Honda edged out Steve Arpin’s Ford Fiesta. The pair beat Scott Speed (3rd place) and Tanner Foust (fourth place) in the Final to end their dominance. Honda and Ford caught up with the Volkswagen Andretti team, while Subaru was struggling trying to figure out their suspension issues. Go to Page 2.

Both Subaru WRX STI Global Rallycross Supercars were out of the running and could’t even compete this weekend at Round 2 Red Bull Global Rallycross in Louisville, Kentucky. It means Atkinson and Sandell are in next to last place in the standings going into Rounds 3 and 4 in Thompson, CT (June 3-4) a double header. Can Subaru get their suspension problems figured out? Stay tuned.