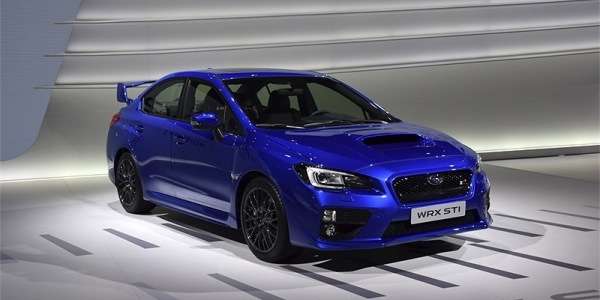 The all-new 2015 Subaru WRX STI returns to the UK one year after its predecessor was withdrawn from the market. Demand is already high for the performance flagship.
Advertisement

The iconic Subaru performance flagship, 2015 WRX STI is returning to the UK one year after it was axed from the market and demand is high. It’s return is one step closer after the 2015 STI just made its European debut at the 84th Geneva International Motor Show. There is strong early demand from the UK as buyers line up to get in early orders. Subaru UK is advising interested performance customers to register early if they wish to secure a car for September delivery. Subaru says the STI will be in UK showrooms as early as this spring.

The official on sale date in the UK for the new model is May 1. And there’s more good news for UK STI buyers. The price of the 2015 Subaru WRX STI is confirmed at 4,000 British Pounds lower than the previous-generation performance model. Thanks to changes in currency exchange rates, the new WRX STI is priced at just 28,995 Pounds. UK buyers are already getting their orders in, and Subaru UK reports that the first allocation of cars is already reserved.

The new 2015 STI will only come in sedan body style, as the five-door hatch is not offered in the new-generation model. UK performance enthusiasts can expect a significant range of modifications and enhancements to the new STI. The body, chassis, interior and packaging of the new STI have all been upgraded. The STI gets all-new exterior styling and the body and chassis have been significantly stiffened to improve torsional rigidity.

The 2015 STI comes with the latest iteration of Subaru’s Vehicle Dynamics Control (VDC) with Active Torque Vectoring that allows for improved control and driver engagement. It also gets a a stiffer suspension for improved performance in the corners. A great deal of attention of has been given the new hydraulic steering system, which uses a quicker ratio and stiffer steering rack.

Inside, WRX STI gets new soft touch materials, new STI dials and carbon-effect and metal trim are employed for a sporty feel and higher quality ambience. It also gets a new, smaller-diameter D-shaped steering wheel for better driver feel. In the back, passengers have more leg room due a 25mm increase in wheelbase and there’s also more shoulder and elbow room inside the cabin. Cargo volume in the boot is increased by 40 liters.

UK performance enthusiasts are rejoicing that STI is returning after its predecessor was withdrawn from the market. They are voting for the new 2015 Subaru WRX STI with their pocketbooks and the initial allocation of cars is already reserved. With a lower price and new upgrades, it looks like the STI will be a big hit in the UK market.