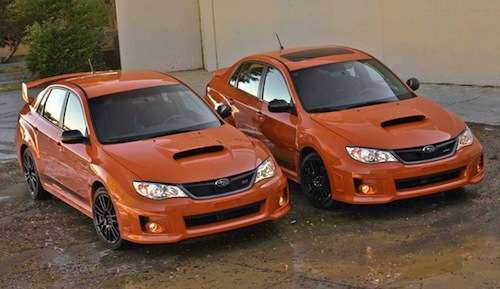 In a surprising move Subaru drops WRX and Impreza in UK

Subaru will discontinue selling the WRX, WRX STI and Impreza in the UK starting next year, but they could have a new car up their sleeve.
Advertisement

Starting next year, Subaru will make a surprising move and discontinue selling the high-performance WRX STI in the United Kingdom. The Japanese automaker has confirmed to Auto Express that they will end sales of the popular WRX, WRX STI and Impreza and they will no longer appear on UK roads after current supplies run out. The British automotive site reports that a spokesman for the brand confirmed that there isn’t enough demand for the cars in the UK, so the cars will be axed from the UK line-up.

Even though Subaru launched the new Impreza in the U.S. and Japan last year with great success, the company has decided to pull the plug on the new model in the UK. The spokesman for the company said, “The new Impreza has been under evaluation in the UK for 12 months, but the decision has been taken not to bring that car to the UK because of insufficient demand.”

Demand high in the U.S.

While the demand is low in the UK, sales of the new 2012 Impreza have been sizzling hot here in the U.S. The fuel-efficient Impreza is attracting new buyers faster than any other car in the Subaru lineup. The report from Subaru of America says that the 2012 Impreza has an astounding 184.2 percent increase YTD. The next nearest car in the lineup is the Legacy with a 13.6 percent increase.

The fourth generation Subaru Impreza is all-new for 2012, and the complete makeover is attracting new buyers here in the U.S. beyond the faithful loyalists. The high demand is due to its new stylish exterior and interior design, and a new fuel-efficient powertrain. It features a new 2.0-liter four-cylinder engine that produces similar power and performance as the outgoing 2.5-liter engine. But fuel efficiency has been increased by a whopping 36 percent. The 2012 Impreza gets a stellar 36 mpg with the CVT, making the Impreza the most fuel-efficient all-wheel-drive gas-powered car on the planet.

The end of the performance WRX STI in the UK

The Brits will no longer have the high-performance WRX STI available either. The report says that the performance-minded model can no longer compete with “more modern rivals in terms of design, interior quality, performance and emissions.” The Subaru spokesman said the WRX STI would not ship anymore cars after the current stock is gone, which is estimated to be early next summer.

Instead, Subaru will focus its efforts in the UK on its all-new models that have been introduced recently. That would include the all-new 2013 XV Crosstrek, the completely redesigned 2014 Forester and the new 2013 BRZ. Demand for the new two-door coupe has been high, and Subaru hopes to replace sales of the WRX STI with a new 2014 BRZ STI that is on its way next year.

It’s surprising that Subaru would drop the WRX, WRX STI and popular Impreza models in the UK, but the Japanese automaker has positioned itself with plenty of new models to fill in the sales gaps.