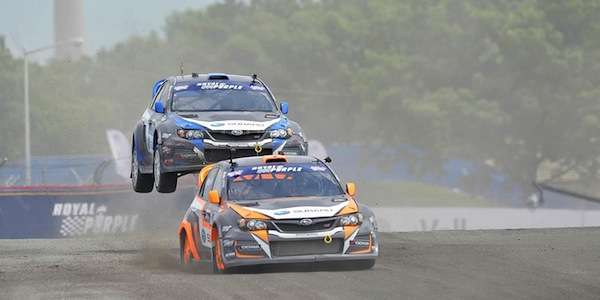 Vermont SportsCar had the two Subaru WRX STI Global Rallycross cars ready to compete this weekend in Washington DC. The cars seemed to be prepared and ready and Bucky Lasek even had the second fastest lap time in qualifying and earned a number 2 seed on the timesheets. Both Subaru Rally Team USA drivers Bucky Lasek and Sverre Isachsen advanced to the Final. But the two drivers were at the bottom finishing 10th and 11th respectively. What happened?

Lasek who won a silver medal at X Games Austin, seemed to be on track to be on the podium again at the inaugural Washington DC Global Rallycross event. He started the event earning the #2 seed with the second fastest lap time in qualifying. Isachsen qualified seventh, just .4 seconds behind his teammate.

Lasek starts toward the back in the Final

Lasek started out great with two impressive second overall finishes in both of the heat races. But Lasek had a disappointing semi-final that left him needing to earn his spot in the Final via the LCQ which put him toward the back of the grid in the Final. He never advanced past seventh place in the race and eventually dropped even further back with a punctured tire late in the race.

After the DC race Lasek said, “Our pace in our Subaru is there, but it just came down to some tough racing and tough luck which made the Final a real challenge. It was great to qualify second fastest and our confidence is still high even after a tough result like this one, we are eager to get a clean run and get on that podium again for sure.”

Isachsen starts in the second row

Isachsen had the best shot at a podium finish as his WRX STI started from the second row of the grid in the Final. It was going to be a challenge against the Ford team, but everything was set for the “Viking Warrior” to pull off a victory until he jumped the start. Isachsen stopped his car in an attempt to save the false start and was forced to then re-launch the car after the entire field had started. Isachsen never recovered the lost time and finished a disappointing 10th overall.

The 600hp Symmetrical All-Wheel Drive Subaru WRX STI Rallycross cars will be ready again for the next GRC event in New York City on July 19-20. Will Bucky Lasek and Sverre Isachsen be ready?