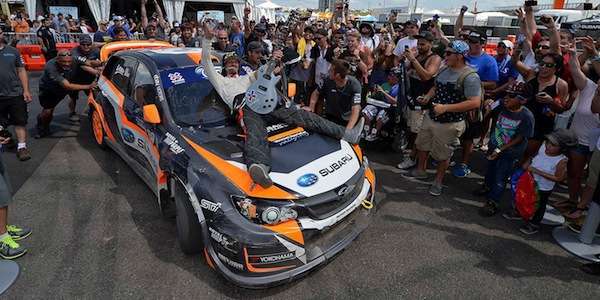 It’s not the Subaru WRX STI driver that many thought would win at the Red Bull Global Rallycross X Games in Austin, and it was a bit of a surprise and maybe even shock. Bucky Lasek held on to take a silver medal and gets a second place finish at X Games yesterday. It was a day that saw lots of banging going on and saw the other two Subaru drivers unable to make the Final. Sverre Isachsen exited early with a broken car. Travis Pastrana who was more likely to be the winner for Subaru, just missed advancing to the Final and took fourth place in the semi-finals.

Lasek, not Pastrana was in the Final

But it was Bucky Lasek who was in the final race for the Subaru team and pulled off a Silver medal in the final round. Having advanced to the final with a third place finish in the Semi-Finals, Lasek found himself in the Final race with an un-enviable position on the back row of the six-car grid. Lasek drove a great race and reeled in 2nd place Nelson Piquet JR after each lap, until Piquet JR mistakenly took the Joker lap twice, and was subsequently black flagged.

Lasek moved into second and then held off a hard-charging Liam Doran to earn Silver. Lasek’s #81 Subaru WRX STI had a gaping hole in the drivers side of his car from a hit he took in one of the corners, but still managed to finished the race in second place.

It was Scott Speed and Volkswagen Andretti Rallycross who claimed victory winning Saturday’s event at X Games Austin. Speed took his second X Games gold medal in as many years. He outlasted the field by driving a clean race as Piquet took the joker twice to earn a penalty and Liam Doran spun in the final corner.

Lasek was viewed as a long shot and earned the 10th seed and was unlikely to finish on the podium with a medal. But incidents allowed Lasek to take his first Red Bull GRC podium with a clean second place. Nelson Piquet Jr. took third place for a bronze medal. After the race Lasek said, “It was intense—that was the hardest fought medal that I’ve ever had to work for. It brings me to tears, I’m just holding them back. My team gets more credit than I do, they work so hard to do the best they can, and we finally have great equipment. We’re making it happen race to race.”

Only six cars were in the Final

Many top drivers were not in the Final and there were only six cars for the Final which gave Lasek a better shot. Ken Block, Travis Pastrana, and Brian Deegan did not make it out of the semifinals, while Tanner Foust and Joni Wiman were eliminated in the quarterfinals.

Pastrana was Team Subaru's fastest qualifier and considered their best shot at a medal at X Games. He was unable to advance out of the semi final where Lasek earned the third and final spot ahead of him. This was Pastrana’s first Global Rallycross race in the #199 Subaru WRX STI and hadn’t had any time behind the wheel. But Pastrana jumped in and was instantly in top form. He was disappointed he didn’t get into the medal round, but Pastrana was happy to be back driving the Subaru WRX STI.

It was a surprise, but Bucky Lasek driving the Subaru WRX STI wins his first medal in Rallycross at the Red Bull Global Rallycross X Games Austin.