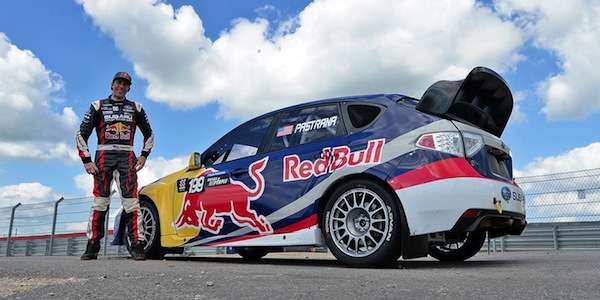 The Subaru Rally Team USA this Saturday brings a new entry with Travis Pastrana who will join Bucky Lasek and Sverre Isachsen. They will all be driving newly-prepared Subaru WRX STI Global Rallycross cars. The team will fight for another X Games medal for Subaru. Pastrana brings more excitement to the Subaru team as Isachsen has been their only real treat until now.

Travis Pastrana will compete at X Games for his only Red Bull Global Rallycross race this season. It could be Subaru’s best shot at a podium finish. Sverre Isachsen has done an admirable job, and Lasek has been a non-factor for the Subaru team.

Pastrana competed in Global RallyCross with his own team the past two years in his #199 Dodge Dart. He earned a victory at New Hampshire Motor Speedway in July 2012, made the main event in all five of his 2013 starts, and closed his program with a podium finish in Las Vegas last November.

Pastrana and four other drivers join the field of 13 other drivers who competed in Barbados. Five drivers, Liam Doran, Ricky Johnson, Toomas Heikkinen, Anton Marklund, and Pastrana are only racing at X Games this year. Pat Moro is using the Austin stop to kick off a limited schedule with his Chevrolet Sonic. Pastrana will be driving the #199 Subaru WRX STI with a new Red Bull livery.

Only one Global Rallycross race this season

Subaru is happy to have Pastrana back with the Global RallyCross team even if its only for this one race. Pastrana first joined Subaru in 2004, and went on to win two of the first three X Games gold medals in Rally Car Racing in 2006 and 2008. He also took 15 Rally America overall victories on the way to four consecutive series championships between 2006 and 2009. His last race in a Subaru WRX STI Global RallyCross car came in July 2011, when he raced in the season finale with a specially-modified car. Pastrana had a broken leg he had suffered just days before the race.

It will be rough on all the cars

The event takes place at the Circuit of the Americas in Austin, host to the 2014 Summer X Games. It's a tight and challenging track and there is no question it could be rough on the equipment. Today, (Friday) Subaru Rally Team USA will run their cars for seeding as well as the first set of heat races.

Travis Pastrana has already been practicing and returns to the wheel of a Vermont SportsCar-prepared 2014 Subaru WRX STI at the Global Rallycross round at X Games Austin on Saturday. It could be Subaru’s best shot at a top finish. The Global Rallycross heat races will air LIVE on ESPN 12:00 to 2:00 p.m. ET, Then tune in to ABC from 2:00pm to 6:00 PM for the LIVE Rallycross Final.

Patrick Rall wrote on June 6, 2014 - 12:26pm Permalink
Not unless a whole lot of other cars crash out. Sverre was barely competitive with the leaders in Barbados.