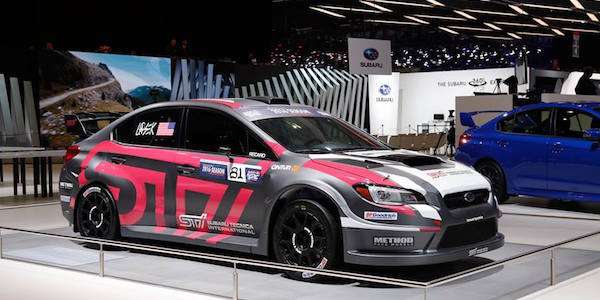 Subaru is preparing for another season of the Red Bull Global Rallycross Championship. Subaru brought the new 2016 WRX STI GRC race car with Lasek’s livery to the Geneva International Motor Show. It was unveiled today for the press. We’ve seen the car before in a press release and the general public in Switzerland will be able to check it out this week.

Subaru has made some improvements to the GRC cars and Vermont SportsCar is busy preparing the STIs now in Colchester, Vermont for Subaru Rally Team USA. Vermont SportsCar has recently renovated their offices and employee lounge and dining area. The new 2016 WRX STI GRC cars are also getting upgrades. The technicians have been working on the new cars in the shop getting ready for the upcoming season fabricating the frames, bodies and doing engine testing during the mid-winter rebuild.

STI will provide technical support to SRT USA again this year as they compete in the 2016 Global Rallycross Championships. It hasn’t been announced, but Bucky Lasek and Sverre Isachsen should be piloting the Subaru WRX STI GRC cars again this season. Lasek drove SRT USA’s rally car for the first Rally America Sno*Drift rally in January with mixed results.

Changes are made to GRC cars

STI is offering technical support in engine development and other areas that come from the Nurburgring and SUPER GT races cars. The new 2016 Subaru WRX STI GRC cars will be lighter, get improved rigidity and inertia moment optimization. Last year, the drivers struggled and the cars experienced a multitude of mechanical issues. The STI GRC cars have received improvements over last year’s cars and will get engine enhancements that Subaru says will prioritize reliability.

The first race on the schedule is still 80 days away which will be held in Phoenix, AZ, May 21. SRT USA says the new STIs will be ready. Can the new 2016 Subaru WRX STIs compete with Scott Speed’s Volkswagen and Sebastian Ericsson’s Ford? Stay tuned.