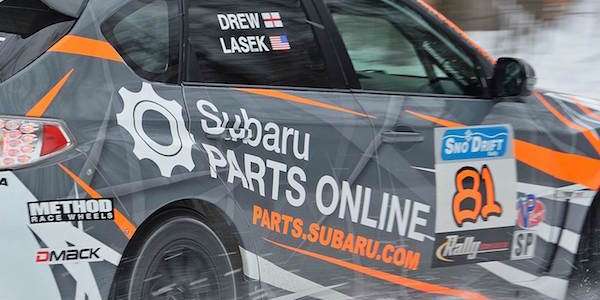 Lasek in the Subaru WRX STI rally car can’t handle the snow and ice at Sno* Drift Rally. What happened to Lasek and Drew?
Advertisement

David Higgins is so good at piloting Subaru’s WRX STI rally car, he makes it appear easy when he wins a Rally America event. Yet, it’s not as easy as he makes it appear. Bucky Lasek ran his first stage rally event and had some growing pains this weekend. Even with a championship co-driver like Craig Drew calling the signals, it’s not that easy to win.

Lasek had very little experience driving in the snow and no experience on the rally stages before this weekend. This was a big test for the skateboarder-turned Rallycross driver. Sno*Drift Rally is held on over 120 miles of snow and ice-covered roads in northern Michigan. The temperatures were cold and the rally stages were icy. It’s a challenging place to start your stage rally career. It didn’t turn out well for the rookie Lasek.

Lasek and Drew finished second on stage 2 and quickly moved up to fourth place overall after the first leg of stages. By the second pass the surface was essentially ice in many places, having been swept clear of loose snow and glazed by the traffic of the earlier run. The duo in the #81 WRX STI got stuck on SS5 for about 20 minutes, and by the time they got out, they were all the way back in tenth place overall.

Day two covers 59 competitive miles over eleven snowy and icy stages. Temperatures were above freezing all day, and the stages had slushy conditions where the sun hit the roads. On stage 8 called Hunters Agren, Lasek went off the road and hit the snow back hard and got stuck. Lasek and Drew eventually got unstuck, but the WRX STI incurred damage to its steering and suspension making finishing the race difficult. Bucky Lasek has a disappointing first-ever stage rally and had a DNF (Did Not Finish).

Yet for Subaru, it was an all-WRX STI podium sweep with Peter Fetela and co-driver Dominik Jozwiak winning the event by a close margin of only 0.6 seconds. In second were Troy Miller and co-driver Steven Harrell. Two minutes back in third place, Brenten Kelly and co-driver Niall Burn rounded out the podium.

Next up for SRT USA will be 100 Acre Wood Rally at Salem, Missouri, March 18-19, 2016. Rally fans hope David Higgins is back in the new 2016 Subaru WRX STI so they can get back to winning. Subaru Rally Team USA's plans for 2016 are being finalized. Stay tuned.