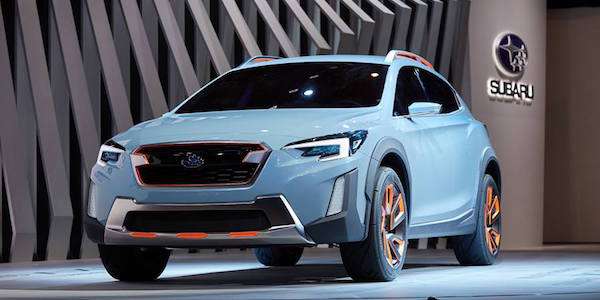 The Subaru XV Concept makes its global debut at the Geneva International Motor Show. What does it tell us about the new-generation Crosstrek?
Advertisement

Subaru calls it their Dynamic X Solid design philosophy which will incorporate all their core values into the new crossover. The XV Concept isn’t as radical looking as some concepts we’ve seen, and it’s likely closer to the new-generation Crosstrek crossover that Subaru will actually reach production.

The first XV Crosstrek was introduced to the market in 2011 and was a hit with consumers. Since then, it’s won praise for its sporty styling and high ground clearance that gives it a “go-anywhere” attitude. It’s become an important model for Subaru now making up 30 percent of sales in Switzerland and across Europe. The Crosstrek will continue making its appeal to a new generation of adventure seekers around the globe.

New technologies are coming for Crosstrek

The new 2017 Impreza will come with Subaru’s global platform that will feature new technologies that are coming like new safety features and interior upgrades. The new-generation Subaru Crosstrek will also get these technologies with new safety performance. Other technologies will include Subaru’s new generation hybrid technology that was seen in the VIZIV Concept vehicle unveiled at the Tokyo Motor Show. It combines a downsized turbo boxer engine, first introduced in the Levorg sports tourer, that improves fuel efficiency and still keeps the fun-to-drive meter pegged.

The show model gets new aerodynamic lines, hawk-eye headlights and a new “Glacier Khaki Silica” exterior color, a blue-gray new color exclusive to this concept model that Subaru says evokes the glacier ice. It comes with the signature matte-black cladding running from the front bumper over the wheel arches and side sills to the rear bumper. It also features orange highlights on the front grille, front and rear bumpers, aluminum wheels, and roof rails. The new lines continue to the back of the Crosstrek with the rear combination lights sharing the same motif as the headlights. XV Concept also gets a more radical raked roofline. It will be interesting to see if Subaru incorporates it into the new-generation Crosstrek.

The 2016 XV Concept at the Geneva International Motor Show gives another peak into the new design language for the new-generation Crosstrek. Like other Subaru concepts, this show model won’t make it to production. It reveals where the brand is heading in the future. Stay tuned.