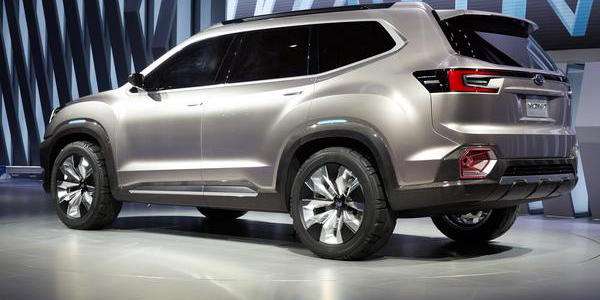 Subaru Has a Trump Card Up its Sleeve; Why it’s Good News for their New 3-Row Crossover

Subaru has a Trump Card up its sleeve with the new President, Why it’s good news for their new 3-Row Crossover.
Advertisement

Subaru will build a new 3-Row crossover in the U.S. and the small automaker is in a better position than other Japanese automakers to benefit from Trump’s policies. President Donald Trump's decision to pull out of the Trans-Pacific Partnership trade accord is bad news for most of Japan's automakers, except for Fuji Heavy Industries (FHI), the maker of Subaru. According to a report from Bloomberg, the small Japanese automaker is one of the best-run automakers in the industry, the only major carmaker to earn returns on invested capital above 10 percent.

Subaru is the smallest Japanese automaker, and they only operate two plants, one in Gunma, Japan, which produces the majority of their all-wheel-drive cars, and one in the US. The plant in Lafayette, Indiana was just expanded (400,000 units) to build the new 2017 Impreza, and will also be building a new 3-Row Crossover for the U.S. market starting in 2018. They also build the Outback wagon and Legacy sedan on U.S. soil.

Bloomberg points out that the Japanese automakers are at risk from the abandonment of the TPP, which would have eliminated the 2.5 percent tariff that the U.S. currently levies on Japanese passenger cars and the 25 percent it charges on imports of trucks. Toyota Motor Corp., Honda Motor Co. and Nissan Motor Co. combined, produce around 70 percent of the cars they sell in the U.S., are produced on American soil. Subaru only produces around 40 percent and Mazda zero.

Subaru appears most vulnerable because 60 percent of their global volume of sales comes from the U.S. market. Subaru would have benefited from the TPP’s reduced tariffs, but Trump’s economic policies, cracking down on high-profile imports, could benefit the small Japanese automaker in a big way. A stronger dollar, helps Subaru most because of the exchange rate compared with the Japanese Yen. Subaru makes more profit with their traded goods as the U.S. economy improves.

Subaru has a card up its sleeve with the Trump administration

Subaru has a card to play up its sleeve with President Trump. The Subaru plant in Lafayette, is located in Vice-President Mike Pence's home state of Indiana. Pence knows that Subaru of Indiana Automotive just created an additional 1,400 new jobs for U.S. workers at the newly-expanded plant, and created 114 new jobs at one of their suppliers in Elwood, Indiana in the past year alone. He has Trump’s ear and that’s good news for Subaru of America. More on Page 2.

While it’s not clear what the Trump trade policies will ultimately bring, Subaru is in a good position with its newly-expanded plant in Vice-President Mike Pence’s home state bringing in new jobs for U.S. workers. Subaru’s new 3-Row crossover will only be sold in the U.S. and won’t be sold in any other global market. More good news for Subaru of America.