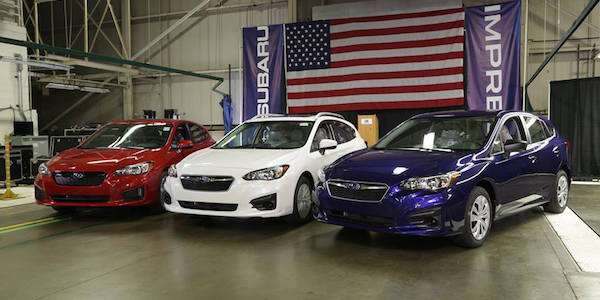 New Subaru Impreza is True Red, White and Blue; Its Impact is Being Felt in America’s Heartland

The new 2017 Subaru Impreza is as American as Apple Pie. It’s having a big impact on America’s heartland.
Advertisement

The Subaru Impreza has been produced only in Japan up until this week. Now the new 2017 Impreza is made on the same line as the Outback wagon and Legacy Sedan in America’s heartland. Impreza took the place of the Camry sedan that was being built by Subaru of Indiana Automotive (SIA) until the contract with Toyota was up in October. It was more than just a vacated spot from the Camry that made the U.S. Impreza production possible.

Fuji Heavy Industries (FHI), parent company of Subaru, invested $1.3 billion in SIA over the past four years, and hired an additional 1,400 associates in the past year alone. SIA's expansion included building a new paint shop and enlarging the engine assembly, trim and final assembly, and stamping sections. It’s had a positive impact on Lafayette, Indiana and surrounding communities.

Subaru’s suppliers are also feeling the impact from U.S. Impreza production. ELSA, located in Elwood, Indiana, 64 miles from Lafayette, is SIA’s supplier of fuel tanks, exhaust systems, air cleaners and air ducts. They also now need to expand. They are adding two production lines to meet the needs with the new Impreza. ELSA is spending $111 million on the expansion and creating 114 new jobs at the Elwood parts factory.

The new Impreza U.S. build has been three years in the making. Pre-production work in the U.S. was a total team effort and came about as a result of a number of SIA associates, Subaru’s suppliers in Indiana and across the U.S., and Fuji Heavy engineers in Japan coming together to make it happen.

With the Indiana plant expansion and the addition of the 2017 Subaru Impreza sedan and 5-door models, SIA will be able to produce over 380,000 vehicles annually. The new Impreza is true red, white and blue. It’s having a big impact on America’s heartland.