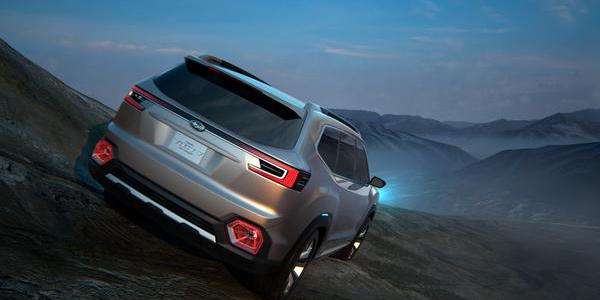 Subaru’s all-new 3-Row crossover is coming soon and the VIZIV Concept unveiled at the LA Auto Show points a bigger future for Subaru in North America. It will be built for U.S. families and won’t be sold anywhere else around the globe. Subaru discontinued the Tribeca because it was too small for American consumers and the styling was boring. Subaru listened to their U.S. dealers and a new bigger SUV is coming in early 2018. Here’s 5 things families can expect with the new Subaru 3-Row crossover when it arrives.

Safety is number one priority for Subaru and the new 3-Row crossover will get all of the Japanese automaker’s latest safety technology. The new SUV will be supported through what is arguably the best driver assist system in the industry: “EyeSight”. Subaru says the new global platform underpinning the 2018 3-Row crossover improves crash energy absorption by 40 percent over the discontinued Tribeca.

The new 3-Row Crossover will be built with urban-adventurers in mind. Active families will haul the kids to school and to sporting events during the week, and take the vehicle to the mountains for weekend excursions. It’s for consumers who love outdoor adventures. With standard all-wheel-drive, it will have a go-anywhere attitude like its Outback and Forester stablemates.

The new mid-size SUV will be the largest in the history of the brand. The new vehicle will be bigger, wider, longer and will easily accommodate the third row which will be standard on the new Subaru crossover. The new architecture will also allow for a roomier interior without making the outside dimensions larger.

Tom Doll COO of Subaru of America says, The concept shows the size but not the final styling. The VIZIV-7 Concept "Is big. It gives you an idea of the dimensions and the size. The three-row, when it comes out, will have its own design language.”

How big is it? The VIZIV-7 is longer, wider and higher than the Tribeca, with a length of 204.7 inches vs. 192 inches. It is 79.9 inches wide, an increase of nearly 6 inches compared with Tribeca. With a height of 72 inches, it is 4 inches taller than the Tribeca.

With the new Subaru Global Platform, the body and chassis will be 70-100 percent more rigid than the Tribeca which will translate to improved steering response, and the increased rigidity of the suspension mounting will also reduce body roll by 50 percent compared to the outgoing Tribeca. The SUV will have a lower center of gravity improving driving dynamics in the corners producing a dynamic ride. More on Page 2.

The 3-Row crossover will be introduced in early 2018

The 3-Row crossover will likely be introduced to the North American market at the 2018 North American International Auto Show in Detroit. It will be produced at the Subaru of Indiana Automotive (SIA) plant in Lafayette, Indiana. This will bring the number of models produced at that plant to four, together with the Legacy, Outback and the new 2017 Impreza compact sedan and 5-door hatch built on the all-new Subaru Global Platform.

Subaru will target young families with the new 3-Row crossover and also grandparents who need to transport the grandkids. It will come standard with Subaru’s Symmetrical AWD system and it’s competitors will be the Toyota Highlander, Ford Explorer, Chevy Traverse and possibly the Dodge Durango and Jeep Grand Cherokee. Look for the new Subaru SUV to hit U.S. showrooms in mid 2018.

Robert Riera wrote on December 18, 2016 - 11:40pm Permalink
I would be very excited to test drive this nice looking monster
JP wrote on April 3, 2017 - 3:59pm Permalink
I'm very excited for this as I have two kids and a '15 WRX... this would be a supplemental not a replacement vehicle. First thank you for the update and info. But my main concern regarding the info in this article is I could care less about it's specs vs. the Tribeca. I want to know how it is in relation to it's competitors the Toyota Highlander, Ford Explorer, Chevy Traverse, etc.. which were briefly mentioned near the end... The Tribeca is no longer in production so the comparison is irrelevant. If they have to compare it to a subaru then it should be compared to the currently produced forester or outback, which are currently under consideration for my dollars. No expected MSRP range either?
vforba wrote on April 27, 2017 - 8:28pm Permalink
If you google other articles I have seen it priced anywhere from the mid $20k to mid $40k on up. They are supposedly offering a 4 cyl and a 6cyl