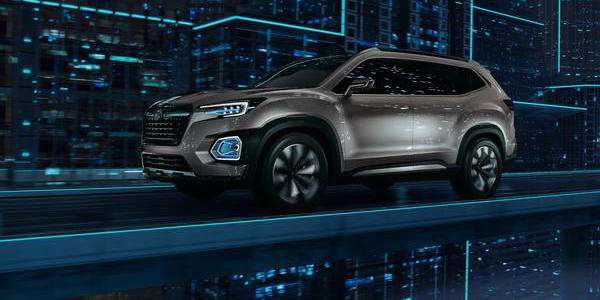 Subaru unveils their new 3-Row Crossover at the LA Auto Show. What does the concept tell us about the production model?
Advertisement

It looks like Subaru hit a home run with their new 3-Row crossover Concept vehicle. It was unveiled at the LA Auto Show yesterday and early indications are positive for the new 7-passenger SUV. What does the new vehicle tell us about the production model?

Of course this is just a concept and not the production model that will arrive in 2018 for U.S. consumers, but it’s not anything like the VIZIV Concept that was a 2-Door vehicle. The VIZIV-7 SUV Concept revealed in LA is a lot closer to what Subaru could be producing at the plant in Lafayette, Indiana soon.

Subaru’s answer to the U.S. market

Takeshi Tachimori, Corporate Executive Vice President, Fuji Heavy Industries said yesterday, “Our latest VIZIV concept is our thinking about how to answer the request from our customers, exclusively for the US market.”

The VIZIV-7 SUV Concept is the largest concept model Subaru has ever produced. It’s exactly what customers in the U.S. have been telling Subaru they wanted. After the Tribeca was a failure for the brand, Subaru realized they needed something bigger for American families. The new 7-passenger VIZIV-7 SUV Concept is Subaru’s answer. At least it gives consumers an idea what to expect when it arrives.

Tachimori went on to say, “The concept expresses our core brand values, safety, dependability, capability for outdoor activities and a forward looking attitude. We know customers in this segment want a full-sized vehicle and the next 3-row from Subaru will be the biggest Subaru vehicle ever.”

Subaru gave exact details on the dimensions of the concept. The body measures 204.7 x 79.9 x 72 inches (overall length x width x height), with a wheelbase of 117.7 inches. The concept rides on 265/55 R21 tires. You can see its size is substantial compared to the outgoing Tribeca. This will be a full-size 3-Row 7-passenger SUV for American families.

The new 2018 Subaru 3-Row crossover will arrive in early 2018 exclusively for U.S. consumers and it will be built in Indiana. If the concept vehicle gets positive press, the production vehicle will likely look very similar minus the big hexagon fog lights. It looks like Subaru hit a home run with their new flagship 3-Row crossover Concept vehicle.