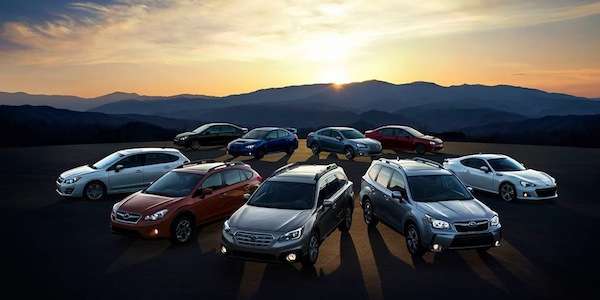 Subaru continues its offensive in April with 4 slick models

The 2015 Subaru Forester, Outback, XV Crosstrek and Legacy lead Subaru’s onslaught in April. What first ever did these 4 vehicles accomplish for the brand?
Advertisement

Subaru of America reports they achieved another record month in sales and four vehicles led the way. It was the best month ever for the 2015 Subaru Forester, Outback, XV Crosstrek and Legacy models. These models helped Subaru reach record sales again in April with Forester and Outback selling more than 10,000 units each in April again.

Subaru outpaces all other automakers

“We have seen record numbers of consumers shopping the Subaru brand and we continue to have excellent demand across our entire lineup, said Jeff Walters, senior vice president of sales, Subaru of America, Inc. “We are pleased by the outstanding results provided by our retailers that included the best April ever for Forester, Legacy, Outback, and XV Crosstrek.”

Subaru’s top models were newly remodeled this year or recently redone like the Forester in 2014 except for the XV Crosstrek which is due a refresh next year. All four models represent what the brand is doing to attract new buyers. Subaru has created a niche market and is appealing to those who lead active lifestyles. The top three models Forester, Outback, XV Crosstrek are all-wheel-drive, multi-purposed recreational vehicles.

Subaru has been outperforming the industry for years in increase of sales and brand loyalty. Especially here in the U.S, their performance has been remarkable. Performance is the key word not just in sales performance, but in how their cars perform on the road. Subaru also makes cars that are fun to drive.

Subaru has created a niche market position with their entire lineup that includes the popular 2015 Outback and 2015 Forester models that combine outdoor adventures with all-wheel-drive, and they give buyers fun with the 2015 BRZ and performance with the 2015 WRX/STI models. Subaru has three values they seem to be promoting, recreation, fun and safety. It seems to be working well for the Japanese automaker. The 2015 Subaru Forester, Outback, XV Crosstrek and Legacy sedan are leading the way.