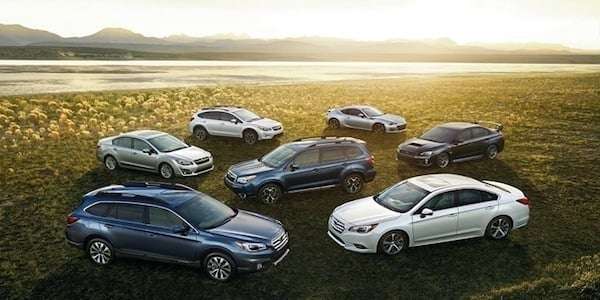 Subaru takes Most Trusted Brand in America crown away from Honda

When it comes to crowns, Honda has worn this one for a long time and now it’s been taken away by Subaru. What award did Subaru just pick up?
Advertisement

The Kelly Blue Book (KBB) Brand Image Awards have just been handed out and Subaru takes the Most Trusted Brand in America crown away from Honda. According to more than 12,000 in-market new-car shoppers on KBB’s website, they have “voiced their opinions about today's automakers to determine this year's award winners”, said Hwei-Lin Oetken, vice president of market intelligence for Kelley Blue Book.

Subaru wins with help from the highly rated, Outback, BRZ, Impreza and Forester models in their stable of cars. In addition to many model-specific accolades from KBB this year, Subaru has experienced massive success in KBB's 2015 model-year awards, also winning the top overall brand title for both the 2015 Best Resale Value Awards and 2015 5-Year Cost to Own Awards.

What does KBB say about Subaru?

Here’s what Kelly Blue Book says about the Subaru brand, “Purveyors of long-lasting vehicles that can go more places with more confidence, it's easy to see why KBB.com visitors named Subaru this year's Most Trusted Brand. With all-wheel drive included as standard equipment on every Subaru except its BRZ sports car, enhanced all-weather traction isn't just a feature of Subaru cars but an integral part of the brand itself.”

Honda is still popular with buyers of the non-luxury brands and did win the Best Overall Brand and Best Value Brand awards. Subaru and Honda were the only two automakers with two Non-Luxury Brand awards in this year’s KBB Brand Image Awards. Both automakers have a loyal following of devoted buyers who keep their vehicles and pass them down to family members.

DON’T MISS: 2015 Subaru BRZ points to why Subaru owners are so loyal

Subaru has been outperforming the industry for years in increase of sales and brand loyalty. Especially here in the U.S, their performance has been remarkable. And performance is the key word not just in sales performance, but in how their cars perform on the road. Subaru makes cars that are fun to drive.

Subaru has created a niche market position with their entire lineup that includes the popular 2015 Outback and 2015 Forester models that combine outdoor adventures with all-wheel-drive, and they give buyers fun with the 2015 BRZ and 2015 WRX/STI performance models. Subaru has three values they seem to promote, recreation, fun and safety. It seems to be working well for the Japanese automaker.