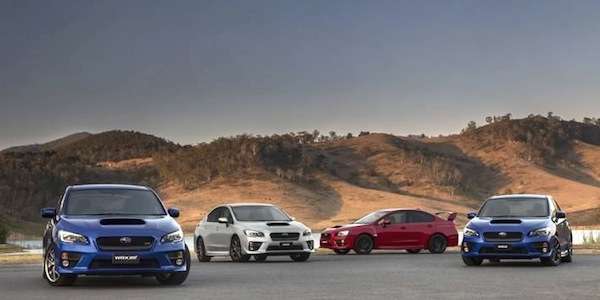 Subaru is now the Best Performance Brand in America

With the help of the 2015 Subaru WRX, WRX STI and BRZ sports cars, KBB ranks the Subaru brand the best performance brand in America. Who did Subaru beat?
Advertisement

Some may think the Subaru brand is all about building multi-purpose all-wheel-drive vehicles like the Outback and Forester. Subaru is also about building performance oriented vehicles like the 2015 Subaru WRX and WRX STI and BRZ sports cars. What really put Subaru on performance enthusiasts radar started back in 1988 when Subaru Tecnica International (STI) was born to manage and develop the motorsports activities for the Japanese automaker.

STI was put on center stage at the 2015 New York International Auto Show and has been given a new mission here in the U.S. Subaru knows they have a very loyal performance fan base that creates excitement for the brand. It involves motorsport activities and filters down to help Subaru and STI develop performance cars like the WRX and WRX STI performance sedans. Subaru says more Subaru STI-enhanced vehicles are on their way to the U.S. market for these enthusiasts.

What does KBB say about Subaru?

KBB says, “Whether you're seeking performance on the track or on the snow, Subaru has you covered. Enthusiast favorites like the WRX, WRX STI and BRZ deliver outstanding performance on everything from race tracks to dirt trails, while mainstream models like the Legacy sedan, Outback wagon and Forester SUV dominate ski towns and snow country from east to west.”

The Subaru brand has experienced massive success in Kelley Blue Book's 2015 model-year awards. Along with many model-specific awards, the Japanese automaker also walked away with KBB’s top overall brand title for both the 2015 Best Resale Value Awards and 2015 5-Year Cost to Own Awards. The 2015 Subaru WRX, WRX STI and BRZ sports cars are the vehicles that started the performance momentum, and there are more Subaru STI models on their way to the U.S. in the future.

Robert junior smith wrote on April 8, 2015 - 11:50am Permalink
I gotta agree overall the award belongs with subaru seeing most non luxury brands have a full stable of different cars quite like subaru