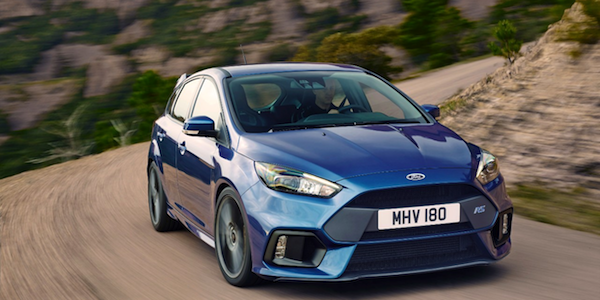 The new 2016 Ford Focus makes its official debut at NYIAS this weekend. How will this new competition from Ford affect Subaru’s 2015 WRX STI?
Advertisement

Just when Subaru thought the competition was going away because the Mitsubishi Lancer Evolution is ending production, a new challenger, the 2016 Ford Focus RS is getting ready to make its U.S. debut. The new U.S. bound Focus RS will make its official reveal at the New York International Auto Show this weekend. How will Subaru respond to the new competition from Ford with their iconic 2015 WRX STI?

Until now, it’s been the Subaru WRX STI, Lancer EVO and Volkswagen Golf R that have dominated the compact all-wheel-drive sports car market. Now, the new 2016 Ford Focus RS will make things very interesting for Subaru and Volkswagen. Mitsubishi is going in a totally different direction and won’t be part of the discussion after the last EVO rolls off the assembly line later this year.

Ford and VW will dominate the hot hatch market

The 2015 Subaru WRX STI and Mitsubishi Lancer EVO only come in sedan body styles, while the Volkswagen Golf R and new Ford Focus RS come in 5-door hatch models. Until now, the decision to drop the WRX STI hatch body style, hasn’t hurt the 2015 STI as sales of the new generation performance sedans are hot and dealers can’t get enough to meet the demand.

Possibly because of lack of production capacity, Subaru decided to drop the five-door model for the new-generation WRX/STI model change and only offer the four-door sedan variant. Subaru hasn’t said if a five-door hatch is coming at a future date in the new generation sports cars. Subaru may need to rethink offering a five-door hatch again with new competition coming from the Ford Focus RS.

Competition will be a good thing for Subaru

When the Mitsubishi Lancer Evolution arrived on the scene in 2003, Mitsubishi created a site with a countdown clock for their upcoming Lancer Evolution launch for the U.S. market. At the time Subaru was a major competitor of Mitsubishi in the WRC and was not going to be outdone by their rival in the U.S. market. Subaru would not be outdone by the EVO, and in 2004 launched the STI in the U.S. with a 2.5-liter turbo engine with more horsepower that the EVO’s 2.0-liter turbo.

If the new hot hatch from Ford had a front-wheel-drive configuration, this discussion wouldn’t need to happen. The 2016 Focus RS comes with Ford’s all-wheel-drive with Dynamic Torque Vectoring that should rival Subaru’s Symmetrical AWD system and Volkswagen’s 4Motion all-wheel-drive system. The fact that Focus RS will have AWD technology changes the compact performance car landscape in the U.S.

Competition is always a good thing in motorsports as it motivates automakers to come up with new technology that filters down to the production cars we drive everyday. Competition from the new 2016 Ford Focus RS that debuts this weekend at NYIAS will be good for Subaru and their iconic WRX STI performance car. It will be interesting to see how Subaru answers the challenge and if they will increase horsepower in the 2016 Subaru WRX STI. Will Subaru bring back the WRX/STI 5-door hatch? Stay tuned.

Brandon Allen wrote on April 1, 2015 - 4:50pm Permalink
I sure hope so. We know that the 2016 STI will likely have a more powerful version of the FB 2.0 L turbo engine that the WRX has. But, it's hard to say if Subaru will actually push past that 305 HP figure since the new one will likely just have a much wider torque band that might up the ante enough to beat the Golf R back down. My hope is that subaru makes the new STI either a 2.3 or 2.5 version of the WRX's 2L with a twinscroll turbo making 330+ HP. I kinda doubt the hatch version will return now with the Focus RS confirmed. Had Ford not made that announcement I was betting Subaru would simply put the FB 2.0L in the STI tuned to ~300hp and re-introduced hatch versions of both the WRX and STI for 2016. Now it seems the battle will be fought with HP and engine tech instead.
Yep wrote on April 1, 2015 - 5:04pm Permalink
This is not a news piece. It's a question. A question which has already been asked. Stop teasing us and trying to drum up website hits...
Damurphman wrote on April 5, 2015 - 5:51pm Permalink
And the answer to that question is no! With current specs and no hatch model, Suburu can not touch the Focus RS!
Brandon Allen wrote on April 6, 2015 - 9:52am Permalink
Right, not with the CURRENT model STI. We know the STI is getting a new engine for either 2016 or 2017, we just don't know what it will be yet. Most think it will just be a more boosted version of the WRX's 2.0L FB. I'm hoping they up displacement some and crank up power by another 50 or so HP but who knows.
HD wrote on April 8, 2015 - 7:36am Permalink
Typical North American answer to this question, just add more power ... sigh! That really doesn't solve anything more than just your drag racing times! The most change the STi should get is maybe a 2L 300HP/TQ engine and some aero tweaks! The STi isn't designed to be a drag racing superstar, it's best on track/off-road! I bet the STi will still out-maneuver the Focus RS in each category except for maybe straight line speed!
Ryan wrote on April 19, 2015 - 12:26pm Permalink
Bases on what we know so far I bet the focus rs is faster on the track. The torque vectoring system is pretty neat and will allow for assisted steering through the corners.
Brandon Allen wrote on April 20, 2015 - 2:02pm Permalink
Well the 2015 STI also has torque vectoring and it works quite well so that won't be the determining factor IMO. Suspension tuning, tires and power will split the two. I imagine that the Ford will get MUCH more aggressive rubber from the factory than the STI which will throw things off. Subaru has never doubled down on the tarmac focus, 2015 has the most tarmac oriented suspension setup but still compromises a good deal for handling on dirt and gravel in addition to the tires.
KIAstoleMyHeart wrote on August 15, 2015 - 5:29pm Permalink
I really like the new Ford Focus RS and the selling point for me would be it's AWD combined with Turbo. This is where Subaru lost me, and I bought my first KIA Forte5. I NEED the versatility of a hatchback and I love hot hatches. I miss my VW GTI, but in the meantime my KIA Forte5 (my first KIA) has totally won me over with it's 201hp Twin Scroll GDI engine, and yes it is faster than my old VW GTI! However, I was always in the market to buy the Subaru hot hatch until it was discontinued and no I do not buy used cars. Sorry Subaru, looks like Ford will be my next vehicle. Maybe once you get your heads out of your arses I might be interested again but every since Toyota bought out Subaru they have been clipping it's balls and Subaru has turned into the new boring GM of Japan.
BrandoDrum wrote on August 18, 2015 - 2:07pm Permalink
I agree. I have a feeling Subaru might re-introduce the hatchback at some point. Hopefully by the 2016 or 2017 model year. I've seen a couple articles of suspected WRX/STI test mules on Jalopnik but others speculated that it was actually a turbo version of the XV Crosstek because of the sidewall clearance in the fenders. Seeing that the previous generation WRX and STI saw 50/50 sales between the hatch and sedan, the numbers are stacked to bring it back for a mid-cycle refresh. They did the opposite on the last generation STI by bring back the sedan body style in '12 after being hatch only from 2008-2011. They also brought the widebody style to the WRX hatch the year before. If that's a template for the current generation, I think we'll see the STI get a more powerful new engine in the form of a beefed up 2.0L from the WRX and both the WRX and STI will get a hatch version as well. Might happen over a couple different model years, which change happens first is anyone's guess. But in the end, this type of strategy is pretty commonplace these days. We can thank Steve Jobs for influencing the market to hold on to the good stuff for the next year rather than rolling out your best work on day 1. Get your core audience to buy the same product twice and convince them they are buying something new.
Dennis wrote on September 17, 2015 - 6:56pm Permalink
Easy.... I have wrx 2015. Currently upgrading to Cobb stage 3, new wheels, new rubber. Now will be better than STI and whatever Ford comes out with