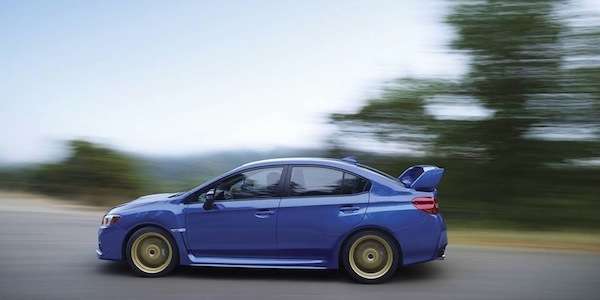 The newly remodeled 2015 Subaru WRX/STI line of performance cars continues to see record sales at the beginning of the year. Subaru of America (SOA) says the 2015 WRX and WRX STI performance sedans had their best February ever.

The 2015 Subaru WRX/STI line saw a 31 percent increase in February over the same month last year and a 43.7 percent increase year-to-date. The performance WRX sedans are flying off dealer lots and demand is extremely high. Demand for the high-performance 2015 WRX STI models is even higher.

Hueberger Motors in Colorado Springs, the highest volume Subaru dealer in the U.S., has twelve 2015 WRX models on their lot ready to sell. Six of those models come with the new Continuously Variable Transmission (CVT) automatic option, and six available with the standard 6-speed manual gearbox. They have another 14 WRX models in transit from Japan on their way. They have no 2015 WRX STIs on their lot and have only three STI Limited models in transit from the factory in Gunma, Japan.

CHECK OUT: Bucky Lasek takes his 2012 STI to the next level [video]

It may be a good time to buy a preowned WRX or WRX STI. Although Heuberger has no used WRX/STIs on their lot. A quick search shows there are many previous generation models, both sedans and hatchbacks, for sale by dealers and private owners around the country. If you want a WRX STI now, this is an option.

The Subaru brand is doing well not just with the WRX/STI line. Subaru of America reports another record February. SOA reported record sales for February totaling 41,358 vehicles, an 18.5 percent gain over February 2014. The company also reported a 21 percent gain over the same period in 2014. Forester, Legacy, Outback and XV Crosstrek sales were also strong as each model line achieved its best February ever. If you want a 2015 Subaru WRX, you can find them now. If you want a 2015 Subaru WRX STI, you will have to order one and wait.

Curt wrote on March 4, 2015 - 11:29am Permalink
I find it hilarious that a V6 mustang killed the STI on a track test from one of the major car mags. Posted a second or two faster while still bouncing off the max speed limiter. LOL. STI doesn't even take it in the curves.
Troy wrote on March 4, 2015 - 6:33pm Permalink
You believe car mag reviews do you? Let me guess, did this magazine happen to have lots of Ford ads? LOL
mitch wrote on March 4, 2015 - 6:37pm Permalink
obviously it would be defeated, V6 vs V4? even if the STI is turbo'ed it still cant beat a V6 with bigger bores.
2015STi-IMS wrote on March 4, 2015 - 8:15pm Permalink
I would love to see where a stock v6 mustang took on an STi and beat it all around the board.
josh wrote on March 6, 2015 - 11:36am Permalink
v4? really? let me tell you something, the new ecoboost mustang is faster than v6 in every single way but it is still not faster than a subaru wrx if you look at the track time let alone STI. Check out motor trend, you will find the info.
Jason L wrote on March 5, 2015 - 10:43am Permalink
The mustang is not a practical car in a area with snow or if you have kids.... not many people buy a car just for the track.
Aaron wrote on April 2, 2015 - 1:18pm Permalink
You sir are a fool, car and drive review of both cars: Mustang ecoboost 0-60 5.2, WRX not STI 0-60 5.0.
Trey wrote on May 26, 2015 - 2:14pm Permalink
I find it hilarious that you actually believe that drivel. Let me guess, was the magazine Fast Ford?
Kemo wrote on March 25, 2015 - 10:12pm Permalink
I can't even find a WRX. I've called around my state to ensure that there will be a WRX (non-STi) available for test drive. Either way, I have to order in the WRX (the cars just sell too fast). For me, the differences between the STi and non-STi are negligible, so it isn't worth the extra 7 grand for me.
Eric wrote on April 7, 2015 - 3:11am Permalink
@Negligible (difference WRX and STI) NOT TRUE. You want to modify your WRX you are going to pay out the yang hole. The STI is hand built in Japan. WRX in the USA. I have driven both the WRX and I own a limited STI. And the STI is by far a superior car. The new 2015 is absolutely a beast. The suspension and driving is off the charts. 30% stiffer then even the 2014's. I'm going to hold on to my 2012 (23k miles) and it's still worth over 32k. I'm putting in an after market turbo, fuel injectors, rails etc. I love this car. I used to own a Ford Cobra and this car is WAY WAY more fun to drive and practical. The Ford finish is a joke like some retarded assembly line workers finished it. My friends Boss 302 has like 3" buttons LOL. My STI is all leather thick. Gorgeous interior. Spring for the limited or launch control STI if you can it's worth every penny. And resell is outstanding. You will lose more on the WRX in resell then the STI for sure.
JoeMag wrote on June 2, 2015 - 7:45pm Permalink
STI hand built in Japan, WRX in USA? Then those folks who built my 2015 must have shipped mine via Gunma Japan because that's where it came from. No wonder I waited 5 months after ordering for it to arrive. No WRX is built in USA. And STI is not hand built. STI also uses old technology EJ motor as a placeholder while the new more powerful FA based STI motor is being developed. Guess which motor the WRX has... Enjoy your STI, but at least try to get your facts straight. LOL