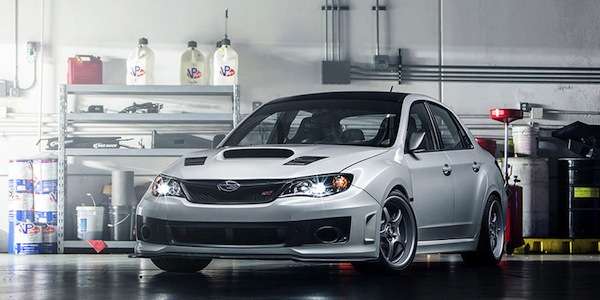 Bucky Lasek visited COBB Tuning and woke up his 2012 Subaru WRX STI. Check out how COBB SoCal helps him get an extra 100 WHP.
Advertisement

Bucky Lasek doesn’t just drive for Subaru Rally Team USA because its a job, he’s passionate about Subaru and owns a 2012 WRX STI daily driver. When Lasek is away from the track, he likes to spend time with his family, but he can be found working on his 2012 Subaru WRX STI street car that he has been modified with a carbon fiber hood and set up for track time. He says it’s more fun than his twin-turbo 996 Porsche he used to own before this.

Lasek lives near LA and has been a customer of COBB Tuning for a number of years now. COBB is a custom tuner for Subaru, BMW, Mazda, Mitsubishi, Ford, Nissan and Porsche turbo vehicles headquartered in Austin TX. He recently went back to the COBB Tuning SoCal shop to get some help bumping up the power output of his 2012 STI sedan. The guys at COBB Tuning said, “Bucky’s goal with his 2012 STI was to show what the car is capable of with the budget of an average enthusiast in mind.”

Lasek had already modified the STI with a coilover suspension kit, upgraded swaybars, and basic bolt-on performance pieces to increase airflow through the engine. His STI is a daily driver that he uses to take his kids to school, drives on the canyon roads outside of LA and occasionally takes to the track. COBB had previously tuned the 2.5-liter’s 305hp to get 321 hp and 364 lb ft of torque on a 50/50 blend of ACN91 and 100 octane fuel with an upgraded exhaust manifold, turboback exhaust, fuel pump, and intake.

After consulting with COBB SoCal about how to get more power from his STI, the crew came up with a short list of modifications to help Lasek reach his power goal. The list included adding a Blouch Dominator 1.5XT-R turbocharger, COBB 1300cc Fuel Injectors, COBB Fuel Pressure Regulator Kit, COBB 3-port Electronic Boost Control Solenoid and Accessport V3 Upgrade. All this was tied together with custom tuning on three fuel types: 91 octane, 91/100 octane blend, and E85. The new Accessport, allows Lasek to switch between the different maps depending on the fuel in the tank.