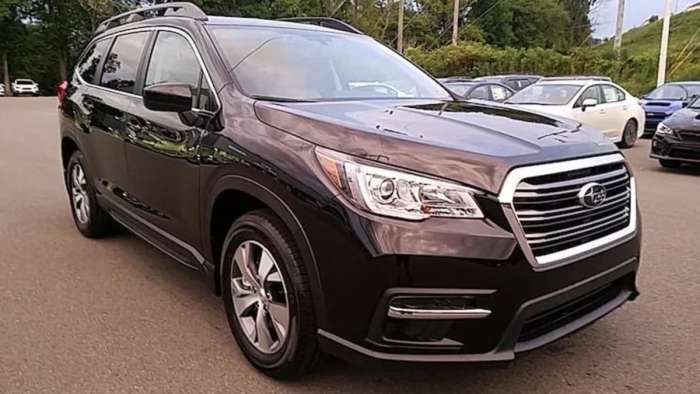 The Subaru Ascent is flying off dealers’ lots. See why the Ascent and Crosstrek are the top 4 quickest-selling cars in America.
Advertisement

Subaru can’t build their largest SUV fast enough. According to a new report from 24/7 Wall St., the all-new 2019 Subaru Ascent family hauler and the newly-redesigned 2019 Crosstrek are the top 4 quickest-selling cars in America. The Subaru Outback SUV/Crossover and Forester SUV are the top 25 hottest cars in America. Subaru builds the Ascent 3-Row family hauler at their U.S. plant in Lafayette, Indiana, and they can’t keep up with demand.

24/7 Wall St. says the new Ascent 3-Row (average days on the lot: 19.9) is the fastest moving car on the list of the 26 quickest-selling vehicles in the U.S. last year. The level of demand is based on the number of days it takes for a dealer to sell a car, also known as days to turn. The second-generation Subaru Crosstrek (average days on the lot: 25.6) is the number four quickest-selling vehicle in America.

Build it and they will come

Subaru made a smart move and built the largest vehicle they’ve ever offered when they brought the new Ascent 3-Row last year. The Camden, N.J. automaker was losing customers to other carmakers when their families outgrew the Forester and Outback all-wheel-drive SUVs. So dealers asked Subaru Corporation to design a vehicle to replace the outgoing Tribeca model. Subaru Corp responded and it paid off big in the U.S. and Canada, the only global markets the Ascent is offered.

Crosstrek is also one of the hottest small SUVs in America. Subaru gave it a complete redesign last year and customers have responded to the all-wheel-drive vehicle which received upgrades in safety, infotainment and driving dynamics.

So if you want a new 2019 Subaru Ascent or Crosstrek, you may have to wait for the specific model and color as customers are snatching up the most popular models quickly. Outback and Forester are also in short supply.