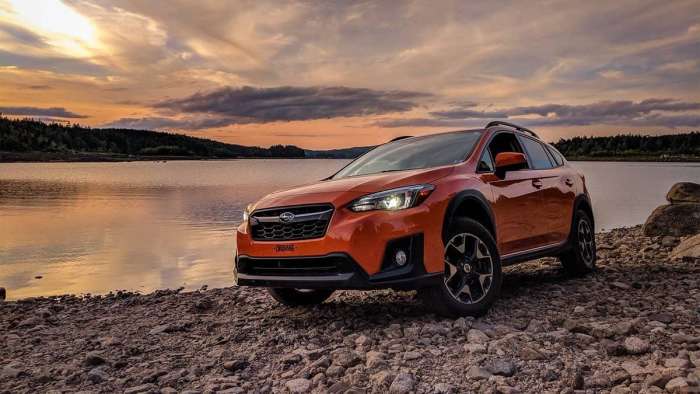 The second-generation 2019 Subaru Crosstrek is in rarified air and is the third-hottest new car in America. Why are consumers attracted to the small SUV?
Advertisement

Consumers doing their research when looking for a new crossover, are looking for all-weather capability, a good urban commuter, fuel-efficient, has enhanced active safety, and is recreation-purposed. Where are they finding all this? In the newly-redesigned 2019 Subaru Crosstrek.

Subaru hit a home run with the Crosstrek small SUV. It’s built in Japan and selling like crazy around the globe, especially in the US. Consumers are snatching up the new compact Crosstrek at a record clip and it’s the third-hottest new car in America in 2018. It could be the best small all-wheel-drive SUV in America.

According to USA Today, Crosstrek is number three on the list with the Jeep Compass #1, Tesla Model 3 #2, Subaru Crosstrek #3, Honda Pilot #4, Toyota Tacoma #5, and Lincoln Navigator #6 being the six-hottest cars in America.

Why are consumers attracted to the small SUV?

Subaru completely remodeled the Crosstrek for 2018MY and it’s paying off big. Every model in Subaru's lineup posted a sales decline in 2018, except for the new Crosstrek which saw a sales increase of 31.1 percent to 144,384 units in 2018. All other vehicles in the Subaru stable were down for the year.

Crosstrek was one the first Subaru models to get the new architecture (Subaru Global Platform) that improves driving characteristics, increases interior room, and it makes the compact all-wheel-drive vehicle safer than any Subaru model ever built. All future new-generation Subaru models will get it.

Crosstrek’s new architecture improved rigidity in the frame enhancing NVH (Noise, Vibration, and Harshness), handling and safety. Subaru engineers increased the use of higher strength steel to pull off the improvements. The Crosstrek also gets a new suspension with the rear stabilizer now attached directly to the body that reduces body roll by 50 percent over the outgoing model. This all translates to improved driving dynamics.

Consumers doing their research when looking for a new crossover, are responding in a big way to the newly-redesigned 2019 Subaru Crosstrek. They get an all-wheel-drive vehicle that’s comfortable for the city commute, fuel-efficient, gets enhanced active safety, and is recreation-purposed with a go-anywhere attitude. Subaru’s second-generation Crosstrek is on fire in 2018 and is the third-hottest new car in America.

Al Schultz wrote on May 11, 2019 - 4:02pm Permalink
"Form follows function." So many SUVs have poor rear/side visibility... except for Subaru Forester and Outback!