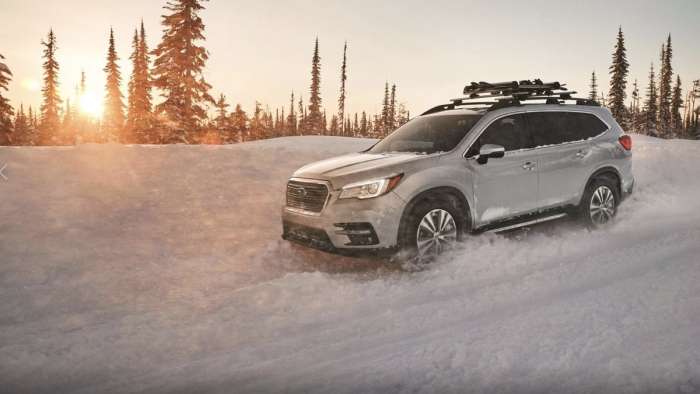 Tribeca was a bust, but the all-new Subaru Ascent is a hit. See what the Midwest Automotive Media Association says about the largest vehicle Subaru has ever produced.
Advertisement

The Subaru B9 Tribeca will go down as one of the brands worst mistakes. It offered three-row seating, but Tribeca was too small, it was underpowered, and it didn’t have the “go-anywhere” attitude of its sporty stablemates. Subaru has righted the ship with the largest vehicle they’ve ever produced, the 2019 Ascent 3-Row family hauler, and it looks like they hit a home run.

Automotive journalists think Ascent is one of the best new family haulers around. The 2019 Ascent was awarded “Family Vehicle of the Year” by the Midwest Automotive Media Association (MAMA). The 2019 Subaru Ascent grabbed the ninth Family Vehicle of the Year Award from MAMA at the Chicago Auto Show. "MAMA members pooled their expertise and experience to select the best family vehicles from an outstanding group of new and significantly refreshed models, and the Subaru Ascent (Mainstream) and Volvo XC40 (Luxury) came out on top,” MAMA award coordinator Tim Healey said.

The all-new Subaru Ascent beat out around 100 other manufacturers for the honor. To be eligible, vehicles must be four-door and updated for the annual MAMA Spring Rally and Fall Rally. Family vehicles must be versatile, reliable, efficient and reasonably priced. Ascent checks the boxes in all areas according to MAMA journalists. Being reasonably priced is key for consumers looking for a 3-Row family hauler and the Ascent delivers.

It’s not the first award for Ascent

The new 2019 Subaru Ascent also earned Car and Driver Editor’s Choice Award. C&D used a wide range of criteria pulling the results from their Buyer’s Guide in-depth testing, how a vehicle performed at their test track, “or just old-fashioned subjective desirability.” But it’s low starting price is what sets it apart from all other 3-Row vehicles.

Car and Driver says “All of this adds up to a well-rounded package that finally gives Subaru a no-apologies entry in this overheated segment. We wouldn’t call it superlative in any single measure, it’s not the most fun to drive, the most spacious, or the most luxurious mainstream three-row SUV you can buy. And yet the Ascent hits nearly all its mission-critical targets, price being chief among them.”

Subaru built the largest vehicle they’ve ever produced and infused the new 2019 Subaru Ascent with a recreation-purposed “go-anywhere” attitude that made the brand successful from the beginning. Now Ascent is being recognized for its versatility, reliability, and fuel-efficiency. And being reasonably priced is a big plus for families looking for a 3-Row SUV.

DaveB wrote on February 20, 2019 - 9:20am Permalink
Not if they could make it reliable, they would have a hit.. There are too many customer horror stories about unidentified transmission problems, that I will wait a couple years till the bugs are worked out,.... Remember the 2015 Pathfinder.... Same issues
BostonBob wrote on August 8, 2019 - 12:32pm Permalink
I'm about 7,000 miles in on my Ascent Limited and am really enjoying the vehicle. The EyeSight Driver Assist took some getting used to but I love it on longer road trips with the cruise control on. The CVT transmission also took some getting used to but overall the vehicle is comfortable, good to drive and has been well thought out in terms of convenience for the driver/passengers. If I'm going to nit pick, the middle console cup holders up front do not hold my coffee traveler mugs well or my water bottles. They do not have any adjustments to handle different cup sizes (like my CRV does) so my particular bottles wiggle, make noise and almost tip over...which is a constant daily annoyance. Hopefully I'll get over it at some point. But overall, I'm very satisfied with the performance (love the passing power!) and reliability so far.
Jim in Wisconsin wrote on September 6, 2019 - 12:04am Permalink
I have around 7000 miles on my Ascent Premium. I often pull a boat with it in our hilly terrain. Plenty of power. I like the driver assist and safety features, though it takes some time to understand how they work. I find I use the paddle shifters often to provide more engine braking going downhill, especially with a trailer. The cruise control that maintains distance and the blind spot alerts are very useful. Lots of small features. Seats fold up and down easily giving a lot of seating for kids and grandkids and a lot of room for cargo. After 4 mostly summer months, I feel better about this Ascent than any other vehicle I have purchased. I see no sign of any transmission troubles. In fact I love the way the transmission works. I trust my dealer and Subaru have done their homework and will continue to stand behind their product.