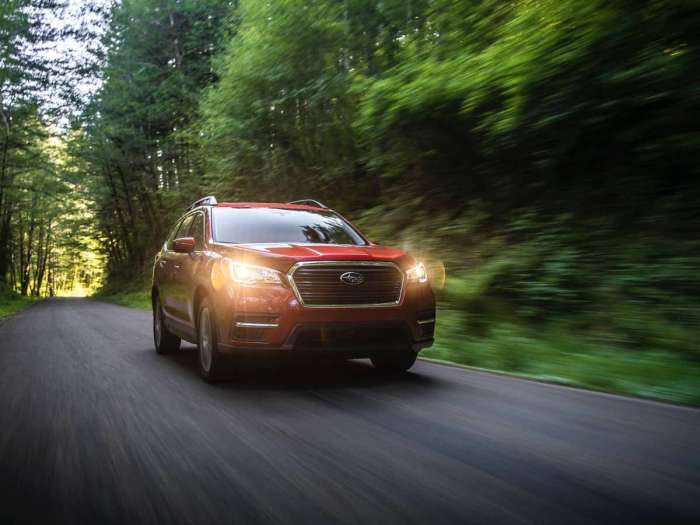 Car and Driver says the all-new Subaru Ascent doesn't stand out, yet it still earns their Editors’ Choice award. See what one thing is chief among its merits.
Advertisement

When Subaru axed the Tribeca from their lineup it was because it was too small for their customers with families. Enter the all-new 2019 Subaru Ascent which is now the largest vehicle Subaru Corp has ever made, and it’s built specifically for North American families. Car and Driver says the all-new 2019 Subaru Ascent is not really “superlative” or outstanding in any single area, but Subaru priced it right for families.

Ascent still gets named a Car and Driver Editors’ Choice

Even though it doesn’t stand out in the crowded 3-Row segment, the new 2019 Subaru Ascent earns Car and Driver Editor’s Choice Award. C&D used a wide range of criteria pulling the results from their Buyer’s Guide in-depth testing, how a vehicle performed at their test track, “or just old-fashioned subjective desirability.” But it’s low starting price is what sets it apart from all other 3-Row vehicles.

Why did C&D choose Ascent?

Car and Driver says “All of this adds up to a well-rounded package that finally gives Subaru a no-apologies entry in this overheated segment. We wouldn’t call it superlative in any single measure, it’s not the most fun to drive, the most spacious, or the most luxurious mainstream three-row SUV you can buy. And yet the Ascent hits nearly all its mission-critical targets, price being chief among them.”

The Subaru Ascent has a starting total MSRP of $32,970 for the base model making it one of the lowest priced 3-Row SUVs out there. The Ford Explorer Limited 4WD starts at $45,235, Toyota Highlander Limited FWD ($43,325) and Honda Pilot Touring AWD ($44,865). The well-equipped Subaru Ascent Limited still comes in lower at $39,970. (all pricing includes destination).

The all-new 2019 Subaru Ascent scores Car and Driver Editors’ Choice Award not because it’s outstanding in any single measure, but because Subaru made it the most affordable 3-Row out there for families.

Ed B wrote on August 24, 2018 - 1:01pm Permalink
Hmm, not necessarily a ringing endorsment, but I'm sure the Subaru brass will accept the kudos...