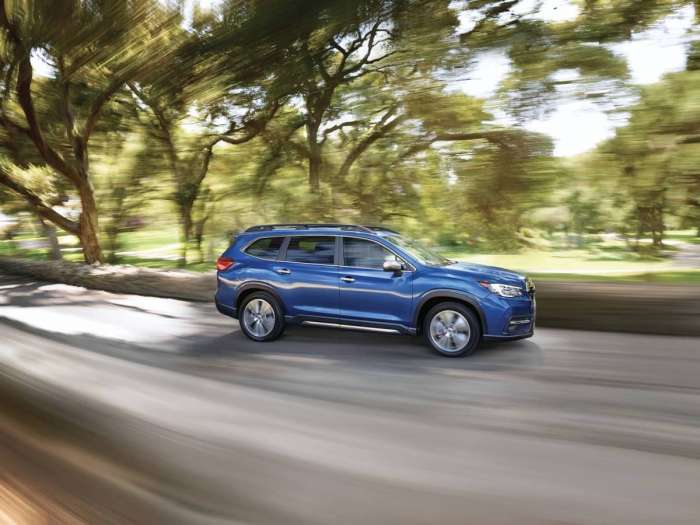 Subaru learned their lesson well with the discontinued Tribeca, See how Subaru didn’t make the same mistakes with the new Ascent.
Advertisement

Subaru has made plenty of product missteps, (remember the 360?) but over the past nine years, they’ve hit it out of the park with the Outback, Forester, and Crosstrek. But the B9 Tribeca will go down as one of the brands worst mistakes. It offered three-row seating, but Tribeca was too small, it was underpowered, and it didn’t have the “go-anywhere” attitude of its sporty stablemates.

Subaru has righted the ship with the all-new 2019 Ascent 3-Row family hauler and it looks like they hit a home run. Ascent is built at Subaru’s plant in Lafayette, Indiana, it’s designed for North American families, and it rides on an extended version of the new Subaru Global Platform.

The all-new Ascent Crossover has a starting price of $31,995 for its base model, features a roomy top-notch interior, excellent infotainment system, and can capably tow up to 5,000 lbs, the most of any Subaru in history.

The new Ascent is not underpowered like Tribeca. It comes with an all-new Subaru 2.4-liter turbocharged four-cylinder Boxer engine, producing 260 horsepower with plenty of torque delivering 277 lb. ft, sending it to all four wheels through Subaru’s proven Symmetrical all-wheel-drive system. The Ascent is rugged, where Tribeca was too tame for the brand.

Tribeca was just an ordinary city grocery hauler where the new Ascent has Subaru’s “go-anywhere” attitude and comes equipped with X-Mode for those serious off-roaders, and 8.7 inches of ground clearance. It’s paired with Hill Descent Control that helps maintain a constant speed when traveling downhill enhancing vehicle control on a backcountry trail.

All those things that keep Subaru customers coming back are found in the new Ascent. It’s dog-friendly, features standard all-wheel-drive, has a “go-anywhere” attitude, has sportier handling due to its lower center of gravity, and will be one of the safest CUVs on the road with its standard advanced driver assist EyeSight safety system.

Ascent isn’t too small inside like Tribeca. Ascent is the biggest vehicle Subaru has ever built, and the Japanese automaker made the most of the interior space with second-row seats that slide for easier third-row access, (second-row captain’s chairs are available), USB charging ports in the third row, a large panoramic sunroof, waterfall head restraints for better rearward visibility, and 19 standard cupholders. The Ascent is the first Subaru to offer cooled seats.

Subaru learned their lesson well with the discontinued Tribeca. They built the largest vehicle they’ve ever produced and infused the new 2019 Subaru Ascent with a recreation-purposed “go-anywhere” attitude that made the brand successful from the beginning.