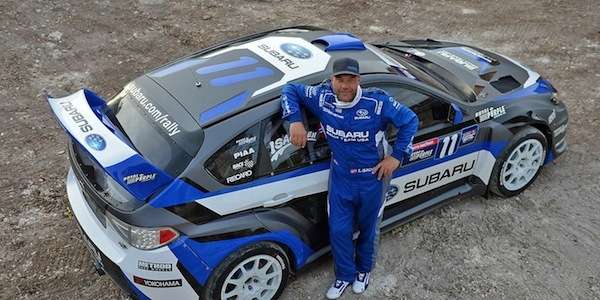 Subaru has announced they will enter the 2014 WRX STI Global Rallycross car in the World RX of Canada. Who will be driving?
Advertisement

Subaru Rally Team USA announced it has officially entered World RX of Canada, August 8-9. Sverre Isachsen, who is a former 3-time European Rallycross Champion, will be piloting the Subaru WRX STI Global Rallycross car for the Subaru team. Isachsen just had his best performance in the STI at the Red Bull Global Rallycross this weekend in Charlotte and took second place overall.

World RX of Canada is round seven of the new FIA World Rallycross Championship presented by Monster Energy and the first overseas round for the burgeoning series. Vermont SportsCar, who is Subaru’s technical partner for the team, will enter a 2014 Subaru WRX STI in the Supercar class for Isachsen. Up until now, the Subaru team has focused on the Red Bull Global Rallycross series here in the U.S., but will venture out into FIA World Rallycross.

A great opportunity for Subaru

World RX of Canada is held on Quebec’s Trois-Rivieres Circuit, just 85 miles northeast of Montreal, which is just a few hours drive from Vermont SportsCar’s shop in northern Vermont, near the USA-Canada border. Smith went on to say the WRX STI GRC car won’t require any modifications to enter FIA World Rallycross. “Although ultimately built to a different series’ rule set Sverre’s car was generally built around the FIA regulations, so it will not be too difficult for us to enter.”

Isachsen is no stranger to FIA European Rallycross and won the series three years in a row (2009-2011) before joining Subaru Rally Team USA in 2012. Isachsen has been instrumental in building Subaru’s GRC program here in the U.S. and is excited to get the opportunity to drive for Subaru in Canada. “I’m very excited for Canada and to compete again against some of the same teams and under the same race format from my years in Europe. We have put so much effort into developing the Subaru from scratch into something very competitive now, I hope for a good result.”

Can Isachsen do it again?

World RX of Canada, Grand Prix de Trois-Rivieres, is known as GP3R and this will be its 45th year running. The event will feature over a dozen races from different series including NASCAR Canadian Tire, Continental Tire Challenge series and Canadian Touring Car. Subaru hopes Sverre Isachsen can have the same success in the new 2014 Subaru WRX STI as he had as a privateer in the FIA European Rallycross Championship.