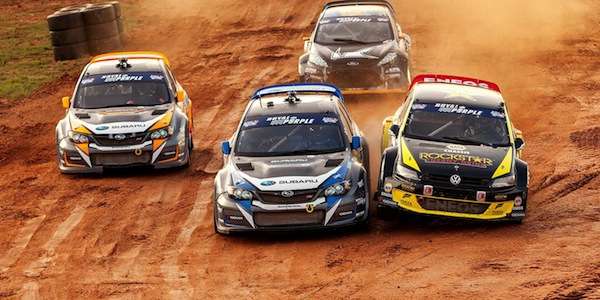 Sverre Isachsen driving the 2014 Subaru WRX STI finishes 2nd behind Ken Block at Red Bull Global Rallycross in Charlotte. How close was the STI to winning it all?
Advertisement

The Dirt Track in Charlotte, North Carolina is normally NASCAR country, but this weekend saw the 2014 Subaru WRX STI Global Rallycross car come to town. This was round five of the ten round season and the GRC drivers saw a new challenge with 70 percent of the track being a heavy clay surface and 30 percent asphalt. Usually it’s the other way around.

Despite heavy rains earlier in the week, the track dried out and the 600 horsepower WRX STI supercars were able to attack the clay oval as scheduled. Subaru Rally Team USA had an excellent day one with Bucky Lasek and Sverre Isachsen each winning a heat race with their Subaru WRX STI’s. The action saw Isachsen take out an NBC camera on one jump. But both Subaru Team cars were in a great starting position for Saturday’s semi-final. Ken Block and Subaru dominated the first day of action.

Most of the drivers seamed to favor the 70 percent dirt track as it enabled them to “get loose” in the dirt surface. The rains caused severe ruts and changed the conditions. But things dried out as the fast cars raced throughout the day on Saturday. Ken Block seamed especially excited about having more dirt than pavement.

Lasek and Isachsen on the front row in Heat 2

Heat 2 of the semi-final on Saturday saw Lasek and Isachsen on the front row with Patrick Sandell. Both got off to a fast start, but Tanner Foust pushed Sandell into the retaining wall and a red flag came out. After the restart, Isachsen jumps in front only to see the Viking Warrior get passed as he tried to avoid a barrier in the middle of the track. The race sees another red flag and restart. Isachsen was able to finish 3rd in the race and earned a spot in the Final. Lasek was able to finish in 4th during the Last Chance Qualifier (LCQ) round and also advanced to the Final round.

Both Subarus battled to get in the Final

The Final saw Isachsen in his #11 2014 Subaru WRX STI starting in the middle of the second row. Bucky Lasek also driving a Vermont SportsCar prepared Subaru WRX STI, barely got in the Final in the LCQ, and had to start in the last spot in row 4. Both Subaru drivers battled all day to get to this place in the Final.

Isachsen gets off to a good start and moves into 4th place as the race progresses. But Nelson Piquet Jr. is pushed into a barrier and the red flag comes out and stops the race. After the restart Isachsen gets another good jump at the starting line and moves into 3rd position. He battles his way into 2nd place in the chaotic and dusty Final with three laps to go. Ken Block dominated the semi-finals and seemed to be faster than anyone else on the track.

The 2014 Subaru WRX STI driven by Sverre Isachsen can’t catch Block but finishes second overall at GRC Charlotte, his best result thus far in 2014. Bucky Lasek, who won Silver at GRC X Games, couldn’t overcome his last row start and finished sixth in the Final. It was a good day for the Subaru team at The Dirt Track in Charlotte. Next up for Red Bull GRC is round six at Daytona, FL August 22-23.