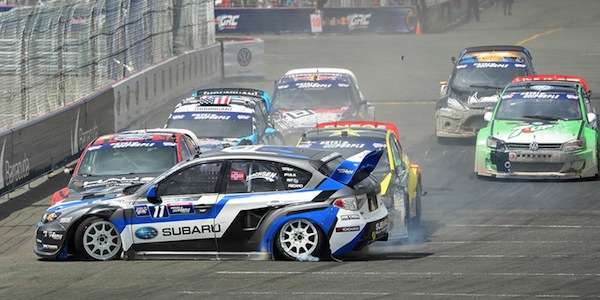 Sverre Isachsen in the #11 WRX STI got off to a great start on Saturday earning 3rd fastest seed position in qualifying. Bucky Lasek driving the #81 WRX STI earned a 7th fastest seed but was beset by a mechanical problem which forced him to miss the subsequent first heat.

Isachsen won his first race, and in the 2nd Heat, which set the grid position for Sunday's Semi-Final, Isachsen stalled off the start dropping him to the back of the 4-car pack, he fought back for a 3rd overall finish. Lasek finished 3rd overall in his heat race as well, but was later bumped up to 2nd overall after Austin Dyne was hit with a penalty for aggressive driving after contact with Rhys Millen.

Isachsen began Sunday with a 2nd place finish in the Semi-Final which shot the Viking Warrior straight to the Final, where he would start on the outside of coveted front row. Isachsen launched his #11 Subaru WRX STI into the lead right off the start and things were looking good. Sverre led nearly two laps before a red flag was put out after Steve Arpin and Scott Speed tangled causing Arpin to spin and became stuck on the course, causing a safety hazard and a red flag, stopping the race.

The GRC cars then had to be restarted which put all the cars back to their original start positions. Isachsen started again on the outside of the front row and launched into a slight lead but then nudged to the inside and impacted Tanner Foust which spun Isachsen sideways. The resulting impact with Foust damaged the steering on his WRX STI forcing him out of the race.

It was a huge disappointment for Isachsen and the Subaru GRC team after they saw victory was so close. If the accidents hadn’t happened behind him, victory was there for the taking. But GRC racing involves both driving skills and some luck along the way. This weekend saw both highs and lows and the 2014 Subaru WRX STI Global Rallycross team goes home disappointed. The team won’t have much time to lick their wounds as they head to Red Bull Global Rallycross Championship action at Charlotte, NC July 25-26.