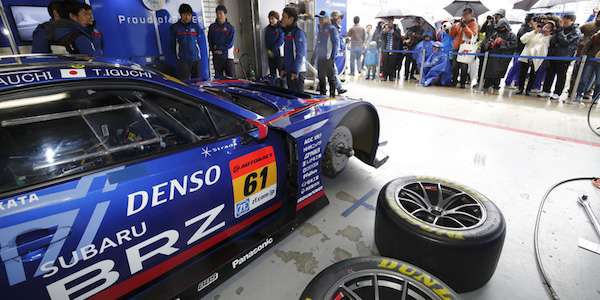 It was November of last year when the Subaru BRZ GT300 saw its last race, and the first race of the 2017 SUPER GT season will have to wait. Snowfall at Fuji Speedway in Japan stopped the event from getting underway, and race officials cancelled the first race. The rear-drive Subaru BRZ and the rest of the field had to sit this one out.

Subaru’s GRZ GT300 race car sat in the covered pits, and driver's Ikuto Takuto and Hideki Yamauchi could only watch as the snow fell on Sunday. On Saturday, the BRZ was able to undergo 50 laps of pre-race testing and finished with the sixth fastest time in qualifying.

In the three weeks leading up to the race, the Subaru BRZ GT300 has been testing changes made in the off season. The two-door coupe received improvements to the layout of the drive system, engine and aerodynamic parts were added. They also made changes to the tires, which was a priority in the off season.

The production two-door BRZ is the only vehicle in Subaru’s lineup that doesn’t come fitted with all-wheel-drive, and the GT300 race car is also rear-drive only. Subaru Tecnica International, Subaru’s motorsport partner, made changes to the transaxle system this off season. The goal was to increase traction by shifting the front and rear weight distribution to the back of the coupe. Why doesn’t Subaru, who is known for their Symmetrical AWD system, add it to the BRZ GT300 for better traction?

READ: 3 Reasons Why You Will Never See an AWD Subaru BRZ

In the production sports coupe, BRZ’s front engine rear-drive configuration allows placement of the engine lower and farther back in the chassis than in any other Subaru model in the lineup. This helps BRZ to attain the best possible center of gravity and “polar moment of inertia.” The Boxer engine is moved closer to the center of the chassis and this helps make the sports coupe compact, at just 167 inches long on a 101 inch wheelbase. This is what contributes to BRZ's great handling characteristics.

If Subaru added AWD to the BRZ production car and GT300 race car, it would change the two-door coupe’s driving dynamics. The rear-drive BRZ GT300 race machine had to sit along with the rest of the field of SUPER GT cars this weekend because of snow at Fuji Speedway. STI will have to wait to see if the transaxle improvements helped traction. Stay tuned.