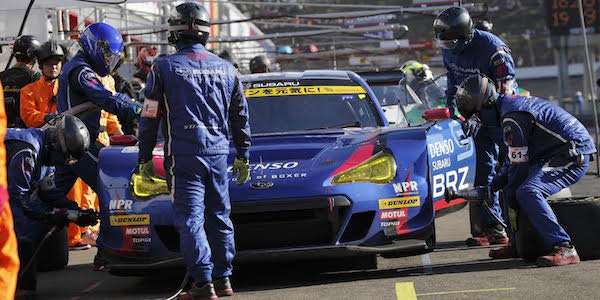 Subaru BRZ GT300 Finishes 6th in Rankings; There’s One Key Technology they are Still Behind

Subaru’s BRZ GT300 finishes 6th in team and driver rankings. There’s one key technology they are still behind.
Advertisement

Subaru’s BRZ GT300 finished the 2016 season in 6th place in both team and driver rankings and it’s not what the team was expecting. There’s one key technology they are still behind the leaders. If they are to win out, they will need to get it fixed. This past weekend, STI finished the final round 8 race in 13th place. STI’s team manager says they still have lots of work to be done. Here’s a recap of the race and what they need to fix.

Round 8 of the SUPER GT “Motegi GT Grand Final” was held on Sunday at Twin Ring Motegi in Tochigi, Japan. The Subaru BRZ GT300 was driven by Takuto Iguichi and Hideki Yamauchi who finishing the race in a disappointing 13th place.

They started 7th on the grid after the qualification session from where the team would have to fight for a higher position. The starting driver Yamauchi, sprinted from the starting flag to overtake two cars and leap-frogged to 5th on the opening lap. He kept climbing up the field, passing one car after the next to reach 2nd and came back to the pit to hand the car over.

The team replaced two tires on the left side of the car to save time and sent Iguchi back onto the track. Joining the field in 13th, Iguchi got the BRZ back up to 9th but without being able to improve his times as he had expected, he finished the race in 13th. STI did have some promising points during the season when they had two podium finishes in a row. They still have work to do as their team manager points out.

General Team Manager Hideharu Tatsumi looked back at the race and commented in frustration, “I think that we damage tires. A lack of power must be forcing some parts of the car to work too hard and this is the result of it. Some cars can complete the race without replacing tires, which means that we are behind them with our technology because we have not reached that level yet. We would like to further improve this part and aim at a higher level”.

The 2016 SUPER GT season has concluded its race schedule with Round 8. Subaru finishes in 6th place in team and driver rankings and it’s not where they wanted to be. It’s back to the shop where STI will try to figure out their tire technology on the Subaru BRZ GT300 for 2017.