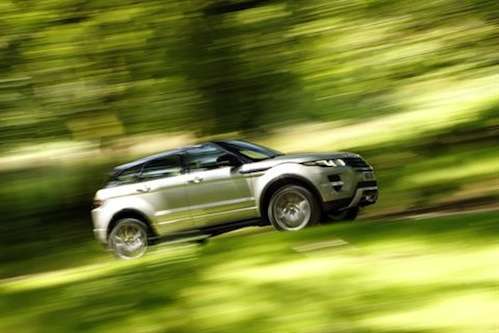 The 2012 Range Rover Evoque just continues to roll with success as it scores its best sales month ever as the 2013 Evoque gets ready to launch.
Advertisement

Land Rover has scored big with the new Range Rover Evoque as it has just recorded its highest retail month since its launch last October. Sales for Range Rover Evoque are up 35% with 904 units sold; making November a record month for the popular new crossover from Land Rover. When Land Rover introduced the new Sporty SUV, it got immediate attention for its new concept-looking design. Since its launch, the Evoque has received over 120 international awards and was recently named SUV of the Year by Esquire magazine.

The Evoque offers style and quality

The sporty crossover has been such a huge success for Land Rover that the British automaker had to add workers and an extra shift to keep up with demand in 160 global markets. The new Evoque has received both media and sales success since its launch and continues to capture the attention of buyers around the globe. The Evoque benefits from a long line of British cars that put a special emphasis on style, and quality of materials and is the best in this class.

The compact SUV was also named Bloomberg News’ Crossover Car of the Year, Motor Trend’s 2012 Sport/Utility of the Year, Decisive Magazine’s Urban Truck of the Year, Automobile Magazine’s 2012 All-Star Award and Best Luxury Compact Vehicle from Automotive Lease Guide. And now buyers are also voting by buying record numbers of the popular British crossover. The all-new 2012 Evoque was born out of the LRX concept coupe that arrived in dealerships last fall and became an immediate hit. The new crossover with the raked roofline has been a big hit among mid-size SUV buyers.

A potent and sporty driving crossover

Tata Motors who owns Land Rover, had to hire an additional 1,000 workers to keep up with demand for the all-new sexy Evoque. The luxury brand builds the Evoque and the LR2 at its Halewood plant which will now employ 4,500 workers. That is three times the number of plant employees they had in 2009. The combination of horsepower, torque, and the fact that the Evoque weighs a few hundred pounds less than most competitors, makes the crossover a potent and sporty driving machine that buyers want.

The new Evoque will likely continue to see success as the new 2013 model gets ready to launch. For 2013, Land Rover has added a new 2013 Evoque model called “Pure”, which is a five-door variant. The new "Pure" makes the Range Rover Evoque more affordable with its new pricing of $41,995 for the base model. The new model features an aluminum alloy roof in place of the panoramic laminated glass roof which comes standard on other Range Rover Evoque models. It also features an interior trimmed in leather and Dinamica synthetic suede.

Land Rover has also experienced exceptional sales for the Range Rover Sport that was the volume leader with 1,634 units sold; making November the highest selling month for Range Rover Sport year to date. The new Evoque has been wildly successful and the new 2013 Range Rover Evoque will likely be as popular as the previous model when it launches around the globe.