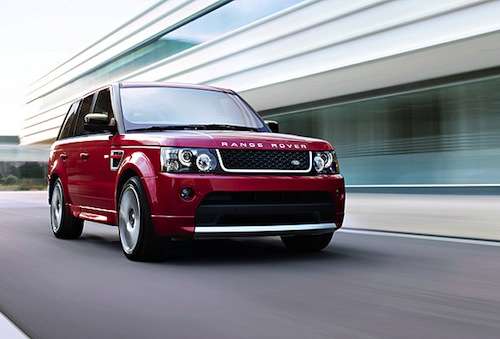 And to show off the new stylish wheels even more, there will be red Brembo brake calipers that can be seen through the new five spokes. They will come standard on the Supercharged model, but customers who don't want to be so conspicuous can opt for black high performance brakes at no additional cost. There will also be a wider choice of interior color combinations and a new optional towing package available on the new Range Rover Sport for the first time.

The Supercharged will still feature an Eaton supercharger that bumps up the horsepower of the Jaguar sourced V8 to 510, with 461 foot-pounds of torque. It also adds a sport-tuned suspension, adaptive Xenon headlights with washers, paddle shifters, a 480-watt stereo with Sirius satellite radio, bright mesh grille and side vents, exhaust extensions, and its own Oxford leathers.

Inside the luxury cabin, it will feature steering wheel mounted shift paddles, a premium LOGIC 7 audio system with satellite radio and HD Radio. A limited number of 450 will be built in Santorini Black, with an additional 300 units being produced in Fuji White.