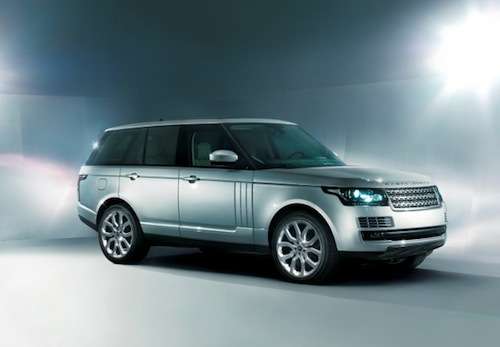 The all-new 2013 Range Rover details have been released and the luxury SUV has been totally redesigned from the ground up.
Advertisement

The all-new 2013 Range Rover is the fourth generation in the Range Rover line and will try to maintain its position as the world’s finest luxury SUV. The 2013 model has been redesigned from the ground up with a new lightweight body, a new chassis structure and new refinements to the interior.

It starts with Land Rover completely redesigning the body of the all-new luxury SUV by giving it an all-aluminum monocoque body structure that Land Rover says is 39 percent lighter than the steel body in the outgoing model. It also gets a new aluminum platform that includes an aluminum front and rear chassis architecture with a completely re-engineered four-corner air suspension. The reduction in weight should result is improved handling in the corners.

Range Rover is world-renowned for its off-road prowess. The 2013 model will retain that designation and has been improved by getting the next-generation version of Land Rover's Terrain Response system.The all-wheel-drive system analyzes the current driving conditions and automatically selects the most suitable vehicle settings for the terrain.

Land Rover put the new 2013 Range Rover through some of the most grueling testing of any automaker. They took a fleet of development vehicles and covered millions of miles over 18 months of arduous tests in more than 20 countries with extremes of climate and road surfaces. If someone is brave enough, the all-new SUV will go anywhere the owner will want to take it.

The new 2013 model gets a acoustic windshield and side window glass that reduces outside noise. The cabin still incorporates materials that use the finest leathers and veneers. It also has more legroom for rear occupants and gets a new two-seat Executive Class seating package for more rear-seat luxury.

While Land Rover hasn’t released the fuel mileage numbers, they say the new Range Rover because of the significant reduction in weight, will get improved fuel-economy and CO2 emissions. The all-new 2013 Range Rover was designed and engineered at Land Rover's development center in the UK and will be manufactured in a new, state-of-the-art aluminum manufacturing facility in Solihull, UK.

It’s hard to compare the all-new 2013 Range Rover with anything else on the planet, because the luxury SUV is in a class of its own. For now, it will maintain its position as the world’s finest luxury SUV.