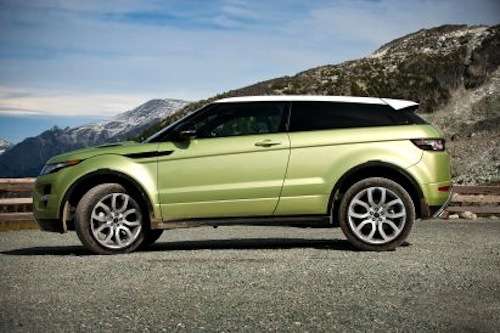 Land Rover has announced that the 2012 Range Rover Evoque has won yet another award to add to its growing list.
Advertisement

The 2012 Range Rover Evoque just continues to pile up awards. Land Rover has announced that the new Evoque has been named the SUV of the Year by Esquire magazine. The sporty crossover has been a huge success for Land Rover as the British automaker has received both sales and media success since its launch.

The compact SUV has also been named Bloomberg News’ Crossover Car of the Year, Motor Trend’s 2012 Sport/Utility of the Year, Decisive Magazine’s Urban Truck of the Year, Automobile Magazine’s 2012 All-Star Award and Best Luxury Compact Vehicle from Automotive Lease Guide. The newest award, 2012 Esquire Car Awards, will appear in the magazine’s October issue, and will be on newsstands September 18, 2012.

Evoque is popular with consumers and media

Kim McCullough, Brand Vice President, Land Rover North America said, "The Land Rover team is really pleased that the editors of Esquire magazine have named the Range Rover Evoque SUV of the Year. The various awards and honors our newest model has received this year exemplifies that the Range Rover Evoque has set a new benchmark for consumers who want a capable, modern compact SUV."

The 2012 Range Rover Evoque is a big hit with consumers because of its sporty new styling and it gives buyers a fuel-efficient compact luxury SUV. The award-winning Evoque is the British automakers lightest and most fuel-efficient Range Rover ever produced. It offers everything from a luxury interior, premium craftsmanship, all-weather capability, and sporty performance all wrapped in a smaller package.

Land Rover is also committed to producing environmentally friendly vehicles and the Evoque is both relevant and has a small footprint. The Range Rover Evoque was studied for its impact on the environment by the VCA (Vehicle Certification Agency), through a lifetime of customer use, to the end of its useful life and disposal. The VCA reported that the Evoque is one of the most efficiently produced vehicles on the planet. The processes that go into manufacturing the Evoque include the use of recycled materials, lightweight components and fuel-efficient technology.

The 2012 Range Rover Evoque is available as a coupe ($44,995) and a five-door ($43,995). U.S. bound Evoque’s are equipped with a 2.0-liter turbocharged four cylinder engine producing 240 horsepower. They all come standard with all-wheel-drive and a six-speed automatic transmission. The Range Rover Evoque gets an EPA estimated 18/28 mpg city/highway. The sporty SUV achieves the excellent fuel-economy by using new efficiency technologies, the use of lightweight materials, and environmentally conscious design.

Esquire magazine writes: “The Evoque is the rebounding company offering people what they really want; style piece first, off-the-road truck second. The Evoque is proof that SUVs can be stylish, forward, elegant and make you feel like a king.”

The 2012 Range Rover Evoque arrived at a good time as the brand is trying to update its image. The SUV of the Year award by Esquire magazine will be proudly displayed along side the many others on Land Rover’s walls. The Evoque gets another well-deserved award.

Evoque gets another award, named World Design Car of the Year 2012

Tesla Contemplates A New Strategy for China Retail even As Sales Boom
Jay Leno on Elon Musk & EVs: “I Think He Should Get ... Credit"
END_OF_DOCUMENT_TOKEN_TO_BE_REPLACED