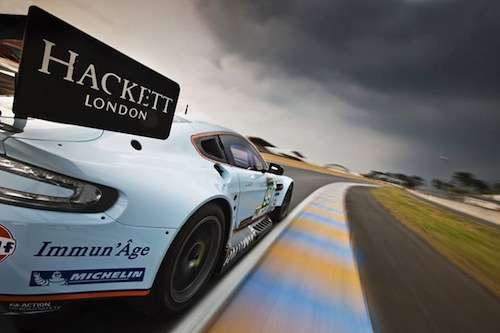 Buckle up and get ready for Le Mans this weekend as the legendary 24 hr race celebrates its 90th year. What is Aston Martin doing with the Vantage GTE for the first time?
Advertisement

If you live under a rock, you may not know that this weekend is Le Mans weekend and the legendary 24hr race celebrates its 90th year. Aston Martin continues their centenary celebration, and it will spill over onto the race track starting June 22 at the world famous endurance race. Aston Martin will have one of their strongest line-ups ever with a five car Vantage GTE entry within the GTE Pro and GTE Am classes. It could be Aston Martins best year at the famous race if their plans succeed.

Aston Martin leads the FIA World Endurance Championship (WEC) in both the Pro and the Am GTE classes following the first two rounds, and the team will attempt the most ambitious assault on Le Mans ever with five cars ready to run for 24 hours. It looks like the AM team is ready to go. On the official June 9 Le Mans test day, the team was at the top of the timesheets with the #97 Pro car and the #96 Am car both showing class-leading pace.

But the team knows it will take more than speed to win the grueling 24 hr race. “Yes, we were the fastest in the test session, but winning a race like the 24 Hours of Le Mans takes more than speed,” comments Aston Martin Racing Team Principal, John Gaw. “Saying that, we’ve also shown great reliability – throughout both the Six Hours of Silverstone, at which we won in both classes, and the Six Hours of Spa where we had no significant issues with any of our Vantage GTEs.”

The radical CC100 Speedster Concept will be on hand

Running five cars for 24 hours will be a huge challenge and will mean the team has to be extremely prepared and focused. There will be fierce competition in the GTE classes and Aston Martin wants to celebrate their centenary year on the podium in both classes. The British automaker has already broke cover with their radical new CC100 Speedster Concept and the most extreme sports car it has ever produced, the new 2014 V12 Vantage S. Both cars were launched this year to celebrate 100 years of building sports cars.

Aston Martin will use the 90th running of Le Mans to cap off the celebration. The British automaker will kick off the race with a host activities and bring an exclusive selection of modern and historic Aston Martin sports cars to take part in an exclusive Centenary Festival Parade. The parade will be led by Aston Martin’s CC100, which will be driven by the British company’s CEO Dr Ulrich Bez. The one-off concept car shows the future design direction of the 100 year old automaker.

A perfect way to celebrate

What better way for the sports car maker to show the world what they will be about moving into the next century? David Richards Aston Martin Chairman, said: “The 24 Hours of Le Mans is, without doubt, the greatest sports car race in the world and this will be the ninth consecutive year that we’ve taken part. However, our centenary year is rather special and if we were to win on this occasion it would be the perfect way to cap a year of celebrations.”

Aston Martin Racing’s five-car Vantage GTE campaign comprises three entries in the GTE Pro class and two in the GTE Am class. The 90th Edition of the 24 hours of Le Mans starts on June 22. Follow the teams progress at www.astonmartin.com/racing.