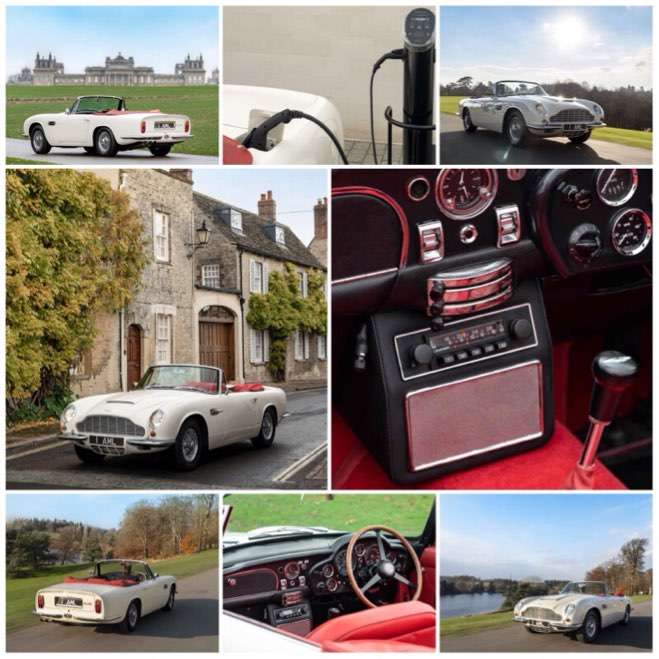 OPINION AND ANALYSIS: Inasmuch as we are fooling ourselves into believing that gasoline new car purchases will be a viable option even in some parts of the world past 2030, we are also fooling ourselves into believing that we’ll be able to drive our present and near future classic cars around twenty plus years from now. This is a tail pipe dream. Well, like Jaguar Land Rover, Aston Martin has also found a solution to anticipate this issue.
Advertisement

Like English Jaguar Land Rover is doing for its legacy model range by converting older Jag and Rover gasoline classic cars and trucks into battery electric vehicles, Aston Martin, the storied but now Welsh motor company is converting not only its legacy vehicles into electric but it’s also offering this service to other classic cars. Doing this not only expands business into the lucrative after parts classic car industry but locks up Aston’s legacy well into the electric future with a model range from the past:

For my work up on the Rapide-e go here to that feature story:

Some may say that changing any of the drivetrain components to something not OEM is a sin no different than destroying the car itself, but as we go along into the 21st century to get a better picture as to how much damage we’ve done to the planet, I predict the only option we’ll have of seeing any of these classic gems surviving any kind of road worthiness possibilities other than being stuck in museums, is by nothing less than having a zero tolerance attitude against their present gas use on future roads, and having more toward the electrification of them.

Aston seems to anticipate this as many other European legacy brands have, and this seems to be their response. “Given the historical significance of these collectors cars it’s vital any EV conversion is sympathetic to the integrity of the original car,” the company wrote in a press release. “The cassette system offers the perfect solution, offering owners the reassurance of knowing their car is future-proofed and socially responsible, yet still an authentic Aston Martin with the ability to reinstate its original powertrain if desired.”

Aston’s first guinea pig was a 1970 DB6 MkII Volante drophead roadster, white on red. According to Aston who supplied these pictures, the car looks to be spot-on restored, with the only 21st century imposing upgrade being a screen on the dash, a UI necessity if seriously negotiating an electric car, especially for long distance driving.

As the EU and the UK separately begin to ban not only new purchase gasoline fueled vehicles by 2040, many jurisdictions around the world, and even some local governments and countries within the European community are taking it upon themselves to even go to extremes of banning things like PHEVs as well, and even prohibit the use of gas and diesel cars currently in existence within their borders.

This wave will come to the new world, let’s not fool ourselves. As we like to separate ourselves from the old world with such oft insulting soundbites like “European socialism,” we too may, or will not have any choice in the matter as our western forests incinerate to ash, but to take those steps our old world cousins are taking to adopt those measures as well to ban gasoline use only when absolutely necessary. And that might mean for military and public safety, possibly in an apocalyptic emergency, only. Electrifying our rolling history seems the right choice to preserve those precious pieces, and yes, to do it for our posterity.

All photos courtesy Aston Martin Media
What do you think of Aston’s EV Heritage?
Let us know below!