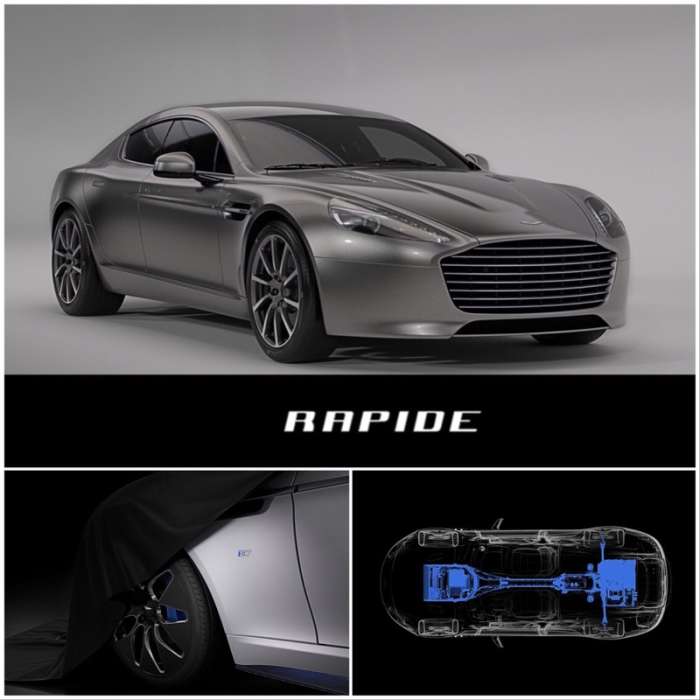 The Ex-Ford in Your Future: Aston Martin Reveals the Electric Rapide E: The BEV Mustang Makers Should Be Making

Instead of waiting to wonder what a Mustang BEV CUV will come to, rogue ex-Forder Aston Martin shows their former boss they don’t even need an SUV platform to electrify one of their products, they can do it on a current production car: their flagship saloon, the Rapide. Attention American Cops: this ex-Ford is definitely a Crown Vic and Explorer Inceptor Killer!
Advertisement

Recently Ford gave us a proposed sacred name then a bewildering reveal of their first all electric, shrouded in too much mystery quite frankly, of their Mustang based CUV variant. This time around it’s Aston Martin showing Ford how it should be done! This is the first in a mini-series of reports, “electric life after Ford,” those companies once owned by Ford that got spit out to be on their own and do better without Ford, starting with their electrics! Instead of Ford having us wait around for a CUV made on a special platform to have it electrified and give it name it may not be deserving, Aston Martin gets straight forward with us, and puts its electric secret sauce into an already in production gas car. Leave it to an Ex-Ford to lead your future! The storied Aston Martin Holdings, Ltd. becomes a trend setter once again by becoming one of the first few luxury performance brands about sports cars, not only to produce a saloon as they did several decades ago as a Lagonda back in the 1960’s, then a few years ago since 2010 with the current production Aston branded Rapide saloon, but also to electrify one as they recently did with Rapide, called the Rapide-E. And Aston didn’t need no stinking electric platform to show their e-innovation, they did like every other maker should have, right into a current production car made for gas. But hurry up to the piggy bank: only 155 will be made:

They originally were going to call it with the same pronunciation different spelling Rapid-E, sounded rah-PEED. But you know how us folks are, especially the way we Americans handle things like iPhone X to call it iPhone “Ex,” instead of what it is, that’s iPhone “10.” At the risk of alienating our British cousins we’d wind up calling a high end British luxury sports electric saloon (Americans roll their eyes over that, not understanding why Brits don’t call it sedan) something like a subway line: NEXT STOP ON THE RAPID E EXPRESS. So wisely the iconic sports car maker decided to just add another “E,” as in capital “E,” for EMPHASIS. So call it rah-PEED-E. RAPIDE-E. For the sake of Anglo-American relations. Thank you.

Making more sports cars than saloons, the last A/M saloon was actually the separately branded boxy Lagonda back in the later part of the 20th. Also there was the DB4 based also separately branded Lagonda Rapide saloon from the early 1960s, the DB5 Goldfinger Sean Connery James Bond Era, about 50 saloon units or so there. While Aston certainly is familiar on how to build saloons the Rapide is the first full on Aston branded which makes Rapide-E their first full on branded electric for their flagship car. Nice going Aston.

Rarity: Limited Production Meaning and What They Won’t Say That Means

You Aston aficionados should be looking at this car more as a special edition build than as a regular production car. With expected fourth quarter 2019 deliveries, the bespoke car maker collaborated with Formula E racer battery maker Williams Advanced Engineering to develop this build. Nothing out of left field to report here, other than a Chinese investor had to pull out, causing the reduction of units to be made, now down to 155 pieces. As I researched I noticed it’s hard to find the number of units made per year from Aston Martin, apparently they like to keep those numbers close to the vest. So there are no comparative production figures for the storied company, for me to look elsewhere at financials and sales. One thing I can write for certainty is that when Aston says it’s only making 155 units of anything, then they’re making only 155 units and that’s it. In the Aston Martin world, 155 units of anything is rarified. Let me put this to scale in a way I didn’t originally want to because I have no production figures.

In 2017 for the first time in its history the brand surpassed 5,000 units in sales, a record. The saloon sales figures comes from AutoCar in which due to an ease on demand for sedans they cut production in 2011, from 2000 to 1200 saloons per year, downforecasting to 500. I hope they continue saloon production, as it is important for a British bespoke luxury performance car maker to have at least one in the line up, but what these figures are crying for is not a saloon, but an SUV. In a year or so, the DBX should fill that hole nicely to leave the Rapide to serve its purpose elsewhere. But I fear she’s already an endangered species.

What Rapide and DBX do have in common besides their extra two doors, is that they both will be Welsh: the new St. Athans Wales facility is where both of the door endowed Astons will be birthed. And since this is where all of the electric Astons will also be made that all will be branded Lagonda, this is where I get to the point of how rare this particular ex-Ford will be: extremely rare and if you have the means to take advantage of it, do so as soon as you can. Since all electrics will be branded Lagonda, the Rapide-E will probably be so unique to be the first and only electric to be branded an Aston. This is conjecture not confirmed but makes sense in the progression: The sedan is already about 9 years old. I haven’t seen plans for cancellation, refresh, or new model. They say they’re only making 155 electrics. They’re ready to whip out their SUV in 2019. This car has the electric nervous system the SUV needs. While they’re no plans yet for a DBX-E where else to get them? So you 155 Rapide-E owners cherish your pieces. If I had to bet, this is the first and last electric Aston branded BEV, it maybe the last few of the entire Rapide line period. A perfect car collector candidate piece.

So I think it’s safe to say that some of these electric cars will one day wind up in some museums, I hope people enjoy them to keep them in one piece before they do. And, if you are the one who’s thinking of buying one, if I were you I’d call your Aston Martin dealer to see where your order is or should you order now. Even for an Aston it seems 155 can go real quickly nowadays.

The Electric Future: Aston or Lagonda?

What about the Aston brand producing electrics? This is what Andy Palmer, the CEO of Aston Martin had to say about their electric future: “As our first all-electric production model, Rapide E will fast-track our knowledge and help us ensure the character and high-performance capabilities of our future EV models and enhance the unique qualities found in all Aston Martins as we know them today. Rapide E will also serve as a critical step on our path to re-launching Lagonda as the world’s first zero-emission luxury marque”.

My answer is Aston’s electric future is what Lagonda is for. Look, we don’t know how Aston will play out its future without asking them and getting a straight answer, but again, the progression is that Aston for the time being will take care of the gas people with fast cars aspirated, turbo, etc., all the gear head stuff we love, and stick shifts too, and Lagonda will take care of the ions, green conscious, fast charging, water cooled batteries, etc. for the e-conscious Aston consumer. It won’t surprise me that if there ever will be a driverless Aston, it’ll be a Lagonda. It’ll play out as long as they can through the century. Porsche says it’ll be the last car company on earth to put a wheel and pedals inside their cars. When one of you younger folks makes it to heaven after me, please don’t forget to find out when it’s your turn, to let me know when you get there, if Aston Martin beat them to it.

The Return of the British Owned British Car Company

With this electric saloon there is also one other thing going for Aston that I’m rooting for. They recently announced their intention to go public, sometime next year. I recently wrote about the entrance of British national Sir James Dyson, the vacuum now electric car industrialist tycoon mogul who’s about to produce 3 electric cars.

Depending who either files or rolls a production unit off a British assembly line first, either Aston Martin Holdings Ltd. in filing, or Dyson Ltd. in producing, either will become for the first time in a generation or more of being the first major British car company owned and operated by British nationals, homegrown by homegrown. And regardless who comes first, both will eventually be British ID’d. Since the bust up of British Leyland and the onslaught of the takeovers by VW, BMW, Ford, and Tata, not even Rolls Royce, Jaguar Land Rover, Bentley, or Mini can claim that they are a British owned and operated car company. All of them are now foreign owned. To we Americans in the world of heavily foreign invested GM or the Italian-American marriage of FCA, that means little or nothing, except for me. If you are a Brit, and anything working class like me, that means something. I get it.

In doing this report, I must confess I never really was an Aston fan. I was always more about fast saloons than sports cars. You cops out there will appreciate this: for me, Bentley was more my brand, it’s more like driving an unmarked Rolls Royce. I actually read the Ian Fleming novels. James Bond was never about Aston, as Aston would make you think, that was the official car of Q Branch, not JB. JB was about driving some kind of Bentley Mark Something, never the range topper. But on the other hand, the bust up and foreign onslaught of the British car industry was a game changer. Big companies sucked them all up, and Ford spit Aston and JLR out. JLR got sucked up again by Tata. Aston was left hanging on its own, and I think as an underdog this is where I became their fan as well. Ninety years ago W.O. Bentley needed to do what he had to do near prostitution to save his company for it now to be the premier bespoke British car company of the world. I now have a deep respect for Aston Martin Holdings to see what they did to save theirs. I’m rooting for them too. Rich people may own and invest these companies, buy and lease their products, but it’s also about an industry where working people put these cars together . . .

So finally, as an example for the world, you know that the Court of St. James needs to have an electric state car. And I hope for and want to see either company, Dyson or Aston, receive a Royal Warrant to build the next electric Royal State Car to see the Queen or the next King ride in it! It doesn’t have to always be about RR or Bentley; British Daimler gave Her Majesty one back in the day, a Dyson or Aston will suit Her or His Majesty quite fine! Not bad, for an Ex-Ford!

Could it be based on the Rapide-E? Stayed tuned!