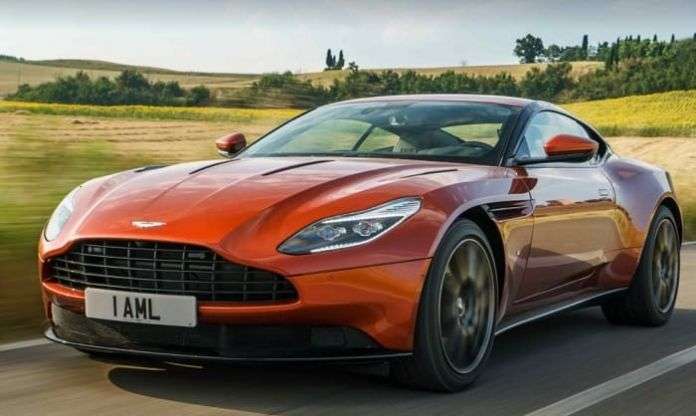 The 2017 Aston Martin DB11 can only be described by one word: beautiful

Looking at the car from the outside, its shape is similar to the roadster silhouette we have all come to know and love from Aston Martin. However the 2017 DB11 has a refined aggressiveness that is so well done it will not only drop your jaw, but leave you drooling as well.
Advertisement

The expertly sculpted lines of the 2017 Aston Martin DB11 extend effortlessly from front to rear, drawing your eyes attention to every single inch of the exterior. The DB11’s astonishing good looks are as much functional as they are fashionable.

These extremely innovative scoops take air from outside the vehicle, funnel it through a series of ducts underneath the bodywork and shoot it back out, upwards, through slots in the trunk lid. The effect this upward moving air has on the aerodynamics of the car is the same as if the car had been fitted with a large spoiler, keeping the car firmly planted on the ground even at high speeds.

Aston provides its buyers with 31 color options all of which perfectly match the DB11’s design and feel but hold on it, it gets better. Don’t see a color you like? Aston Martin will create a custom color just for you. Want the DB11 to match your shoes? Aston Martin can do that. Want the DB11 in Ferrari red? Done. If you can find a color anywhere in the world and show it to Aston Martin the will paint your DB11 in that color. What Aston Martin has done here is literally make it impossible for its buyers to find a flaw, aesthetically, in their purchase.

As impossible as it may seem the Aston Martin DB11’s performance may even outshine its looks. Now the DB11 is no supercar, but it was never meant to be. It was not built to set speed and lap records, it was meant to be driven and enjoyed. With that being said this masterpiece is just as capable shaving seconds off the corners of the track as it is going from stoplight to stoplight on the way to the grocery store. The 5.2 liter turbocharged v12 power plant provides an astonishing 600 hp and 516 lb-ft. The DB11 will hit 60 mph from a complete stop in just 3.6 seconds and will top out at 200 mph.

Aston Martin has also fitted the DB11 with 3 different suspension modes, GT, S (sport), and S+ (sport +) all of which have different firmness settings on the dampers and responsiveness from the steering. Just like a true Grand Tourer, this amazing piece of technology, innovation and artwork fits in everywhere you take it.

It doesn’t matter where, or in what situation you first see the DB11, only one word comes to mind. Beautiful.

LG's New EV Battery Plant Is a Welcome News for Tesla
Tesla Giga Berlin's New Hurdle: It's Not Only the Gov't, but Now Tesla Itself
END_OF_DOCUMENT_TOKEN_TO_BE_REPLACED