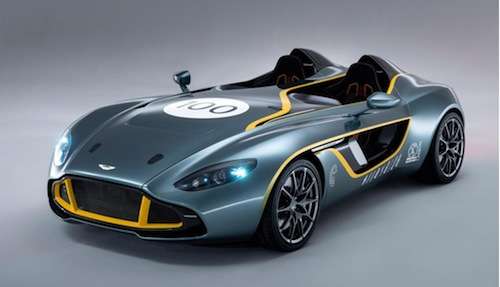 Watch as we updated this story with a new video below of the insane Aston Martin CC100 Speedster Concept. Marchettino captures the supercar as it does a series of redline revs. Aston Martin is a very unique brand with 100 years of sports car excellence history behind them. But the beginning of the next century looks like it could be even more exciting. The British sports car maker built the one-off CC100 Speedster Concept to celebrate the important milestone. They are doing it in a big way and the radical new sports car made its world debut at the Nordschleife at Germany’s ADAC Zurich 24 Hours of Nurburgring race yesterday.

The concept car was viewed by thousands by completing a lap together with the 1000km race-winning 1959 DBR1 with British racing legend Sir Stirling Moss at the wheel. The radical CC100 speedster was driven by Aston Martin CEO Dr Ulrich Bez. Is the new one-off sports car just a one and done car built for the brand’s year-long 2013 centenary celebrations?

It’s very likely that Aston Martin didn’t just build the 6.0-litre V12-powered concept car for just this occasion. According to Aston Martin CEO Dr Ulrich Bez, the new concept car represents more than just a car built for the 100 year celebration. He said, “CC100 is the epitome of everything that is great about Aston Martin. It represents our fantastic sporting heritage, our exceptional design capability, our superb engineering know-how and, above all, our adventurous spirit!

What we are seeing in the new CC100 Speedster Concept is the future of the British brand and glimpses of Aston Martin’s potential future design direction. It’s more than just “birthday present to ourselves” says Bez. He goes on to say that the radical concept shows that Aston Martin is alive and well at 100 years old and what we are seeing is the brand differentiating itself even further from the competition. He says the brand is as “powerful as ever” as they move into the next century of producing high-performance sports cars.

It signals the future of Aston Martin

Chief Exterior Designer Miles Nurnberger says their objective was very simple when they began designing the CC100.Miles said, “The brief was very simple, yet enormously testing: create something that reflects the 100 years of Aston Martin heritage and signals the future of the brand.” The radical sports car was created with a body and interior made from carbon fiber and has incredible power under the lightweight body.

The CC100 Roadster Concept utilizes the latest generation AM11 naturally aspirated 6.0-liter V12 powerplant that we see in the all-new Aston Martin Vanquish. The new V12 engine pumps out 565 horsepower and is mated to a six-speed automatic hydraulically actuated automated sequential manual transmission. And the combination delivers some impressive performance numbers. The CC100 will sprint from 0-62 mph in just a little over 4 seconds making it one of the most potent cars Aston Martin has ever built. It has an electronically limited top speed of 180 mph.

Performance car enthusiasts can clearly see that Aston Martin is not done after 100 years. The CC100 sports car shows there are some very exciting days ahead for the British automaker. We look forward to seeing what is coming and the CC100 Speedster Concept gives us a glimpse of the future design direction.