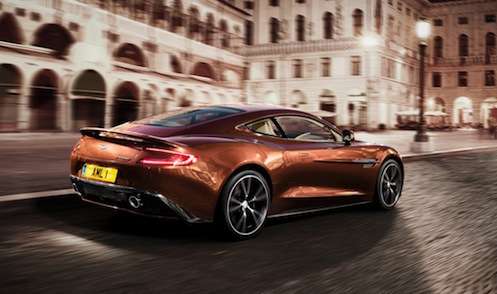 The Aston Martin Vanquish is all set to makes its North American debut in Monterey next weekend.
Advertisement

Aston Martin’s luxury sports car, the Vanquish, will make its much anticipated North American debut at the Monterey automotive event that will feature a series of celebratory events from August 15-19. The beautiful Vanquish will be unveiled for guests to see next Wednesday at McCall’s Motorworks Revival. The $279,995 Vanquish sits atop Aston Martins lineup and will surely be the highlight of the week long automotive events.

“We are very excited about the Monterey program this year and the opportunity to showcase Vanquish at a series of events which are now firmly established as some of the most captivating of the year for automotive enthusiasts from around the world,” said Julian Jenkins, Vice President, Aston Martin The Americas.

Aston Martin will show off their new luxury supercar to guests at a private gathering at the Pebble Beach Concours d’Elegance on August 17th and the British company will showcase the luxury sports car for customers and potential buyers to see for the first time. The venue sits high above Carmel and is the perfect backdrop with its panoramic views across Monterey Bay.

The all-new Vanquish will feature Aston Martin’s next generation VH architecture and gets an updated 6.0-liter V12 powerplant. The new V12 engine pumps out 565 horsepower making the new Vanquish the most potent production model in Aston Martin’s lineup. The V12 is mated to a Touchtronic 2 six-speed automatic transmission and the combination delivers some impressive performance numbers. The Vanquish will sprint from 0-62 mph in 4.1 seconds and has a top speed of 183 mph giving the new Vanquish true supercar status.

Outside, the beautifully designed Vanquish body is totally made from the latest carbon fiber making it strong and lightweight. Styling cues come from the One-77 supercar and show up in the LED rear light blades, elongated side strakes and the new waistline. Guests and automotive enthusiasts will also get a chance to interact with various Aston Martin partners during the special event. Those will include Davidoff, Jaeger LeCoultre, Louis Roederer, Lugano Diamonds, Timothy Oulton and William Grant & Sons.

Jenkins added, “Along with our partners, we look forward to welcoming current owners and automotive enthusiasts to share in our celebrations at the Aston Martin Estate throughout the weekend.” So if you happen to be in Monterey, it would be a an opportunity to see the “latest take on Aston Martin’s iconic visual language” called the Vanquish. Aston Martin will begin making deliveries of the all-new Vanquish to exclusive North American customers in early 2013.