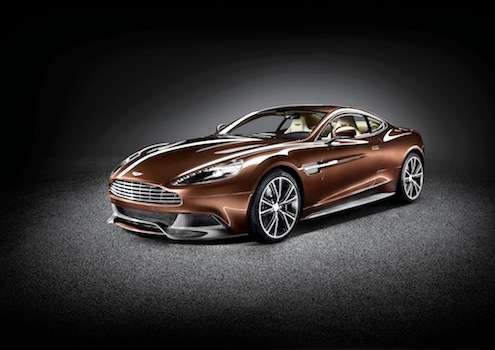 Aston Martin has just officially unveiled the all-new Vanquish on their website for the world to see, and what a sight it is. The new luxury sports car from Aston Martin sits at the top of the British automakers lineup and represents the ultimate in engineering and design. The Vanquish is undeniably one of the most beautiful cars on the planet. Aston Martin has released a two minute video showing every angle of the new supercar.

The press release says the Vanquish will feature the next generation VH architecture along with a much more potent 6.0-liter V12 powerplant. The significantly upgraded V12 engine pumps out 565 horsepower and is naturally aspirated. This makes the new Vanquish the most potent production model in Aston Martin’s lineup.

The V12 is mated to a Touchtronic 2 six-speed automatic transmission and the combination delivers some impressive performance numbers. The Vanquish will go from 0-62 mph in 4.1 seconds and has a top speed of 183 mph giving the new Vanquish true supercar status.

Outside, each body panel on the Vanquish is engineered using the latest carbon fiber making it both strong and lightweight. Styling cues come from the One-77 supercar and show up in the LED rear light blades, elongated side strakes and the new waistline. The new Aero Duct on the rear lid helps counteract lift when the Vanquish is traveling at high speeds.

Inside, the all-new Vanquish gets a newly designed cabin with more legroom and Aston Martin says it’s 60 percent larger than the DBS. The Vanquish is hand-built at the British companies global headquarters in Gaydon in Warwickshire. The new luxury sports cars sits atop an impressive lineup of world-class sports cars from Aston Martin. They include the DB9 , V8 Vantage and the four-door Rapide.

Bez said, “The Aston Martin range is stronger now than at any time in our 99-year history.. The new Vanquish represents the perfect way to signal the beginning of our centenary celebrations next year.”

It looks like the British carmaker who turns 100 next year is starting the celebration early with the beautiful new Aston Martin Vanquish. The new luxury sports car will initially only be available in the UK and Europe late in 2012 with a sticker price of approximately $297,828. The U.S. launch has not yet been announced. Stay tuned.

Watch the two minute video of the all-new Aston Martin Vanquish below.