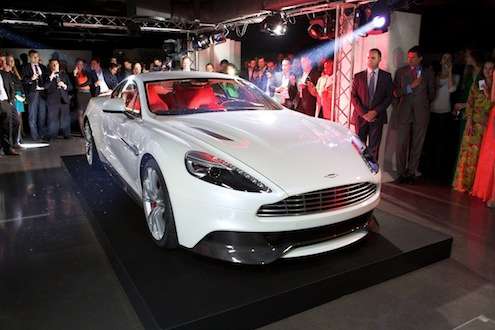 The new Aston Martin Vanquish made its eagerly-awaited London debut at the London Film Museum, Covent Garden and earlier at Goodwood.
Advertisement

The all-new Aston Martin Vanquish is beginning to make appearances around the globe, and this week rolled into the London Film Museum, Covent Garden for its London debut. This was the official debut of the British supercar, and it came a few days after a short sneak preview at the Goodwood Festival of Speed. The video below shows the new V12 coupe completing a few fast laps up the famous Goodwood hill for eager sports car fans to see.

Earlier this week an “exclusive invited audience” of over 500 Aston Martin owners and enthusiasts took part in the unveiling ceremony that included TV stars, high-society guests, and a number of other influential folks as Aston Martin CEO Dr Ulrich Bez formally took the wraps off the new super sports tourer.

Aston Martin C.E.O. Dr Ulrich Bez said: “I am very happy to unveil our exceptional new supercar here in London. As Aston Martin is in its 100th year and prepares for the 100th birthday of the brand in January next year, the debut of this new super grand tourer means we can look forward to the next century with confidence and real excitement.” He added: “I’m very proud of the new Vanquish, and my team that have worked tirelessly to perfect it, and I’m convinced that it will quickly become one of the most sought-after and admired cars on the road.”

The CEO has a good reason to be excited about the new Aston Martin Vanquish that will sit atop the British automakers lineup. The car represents the ultimate in engineering and design, and is a stunning beauty.

The newly unveiled Vanquish features the next generation of the VH architecture along with an upgraded 6.0-liter V12 engine pumping out a massive 565 horsepower. This comes from a naturally aspirated powerplant with the latest technology. The sports coupe is capable of a 0-62 mph time of 4.1 seconds and a top speed of 183 mph, putting the Vanquish into true supercar status. The cars carbon fiber body will be hand-built at the British company’s global headquarters at Gaydon in Warwickshire. Aston Martin will celebrate its100th birthday next year and the new Vanquish will be ready for delivery to a select few lucky owners before the end of the year.

The new luxury supercar will be available in the UK and Continental Europe late in 2012 with a sticker price of $297,828. Anyone wanting one of these beautiful Aston Martin Vanquish cars here in the U.S., will have to wait a bit longer as its launch here has not been announced.

Watch the Aston Martin Vanquish makes its Goodwood Festival of Speed debut in the video below from Shmee150.