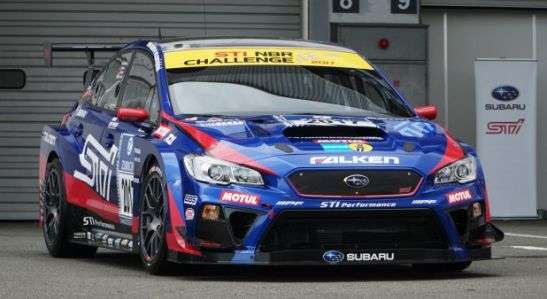 The 2017 Subaru WRX STI Nurburgring Car completes a shakedown at Fuji Speedway, and it gets significant improvements in 3 areas. Will they help Subaru win again?
Advertisement

The shakedown of the Subaru WRX STI Nurburgring race car that will be participating in the Nurburgring 24 hour race in May, was just held at Fuji Speedway. For Subaru, it will be the 10th Nurburgring challenge since 2008, and they will be gunning for their third consecutive win and a 5th overall SP3T class win. The team will draw on their previous know-how and experience and will attempt to pull off another win in 2017. The WRX STI NBR gets significant improvements in 3 areas. Will they help Subaru win again?

The first trial run is for evaluating the improvements made in the off season, and see if they are working as planned. Subaru Tecnica International (STI) is always trying to improve and made significant improvements to the engine, aerodynamics and chassis over last year's winner. STI established a new Motor Sports Technology Division to extract data from last year’s car and strategically supervise each section like the STI Power Unit Technology Division, Vehicle Engineering Division, and Vehicle Experiment Division. Eiji Tatsumi, who served as the STI general manager of the NBR team last year, is participating as a technical advisor. What improvements did they make?

Last year, the WRX STI NBR had a decrease in power due to the reduction in diameter of the air restrictor. In order to compensate for this, STI improved the combustion efficiency by optimizing the internal parts of the engine and increasing the compression ratio. It also included exhaust manifold improvements and changing to a single scroll turbo to improve output and torque. STI also added a paddle shift to reduce the driver's work, improved cross tone ratio of the transmission gear ratio for emphasis on acceleration performance, and overhauled the entire power train including review of center differential control.

The next area of improvement was making the WRX STI more aerodynamic. The STI received modifiers to various places on the front of the race car aiming at increasing the downforce of the front. The engineering division also increased air-flow inside the tire housing, to increase downforce while reducing air resistance. To improve the driver’s environment, they changed the air guide route into the cockpit. More improvements and shakedown video on Page 2.

To improve the handling of the NBR car, engineers lengthened the wheel base, widened the rear tread width, and increased front suspension stroke. Furken Tire made by Sumitomo Rubber, incorporated improvements to improve wear resistance while improving cornering force, all targeting time loss and stabilizing lap times. STI also increased the “bump” stroke of the front suspension, stiffened components, simplified the electric harness thorough weight reduction by redesigning some exterior parts, and optimized weight distribution. Hideki Yamanouchi, one of the four drivers said after the shakedown, “I felt the behavior of the car is even more flexible and the overall balance has evolved further.”

Subaru and STI have shipped the newly-improved 2017 WRX STI NBR to Germany and it should arrive by the middle of April after the final prep at Fuji Speedway. It’s now ready to participate in a qualifier race for the 24-hour race to be held on April 22-23 at the Nurburgring. Subaru Tecnica made significant improvements to the WRX STI. Will they help Subaru get their third consecutive win? The Nurburgring 24-hour race will be held May 25-28, 2017. Stay tuned.