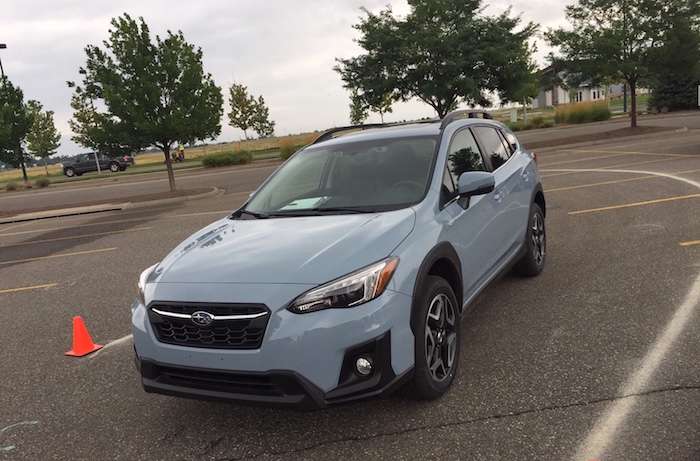 The new 2018 Subaru Crosstrek didn’t just get a remodel, it received a radical transformation. How does it benefit consumers?
Advertisement

When Subaru says they revamped the new 2018 Crosstrek crossover, they weren’t blowing smoke. At the 2018 Subaru Crosstrek media event yesterday in Denver, Todd Hill, Subaru’s Car Line Planning Manager, says the 2018 Crosstrek is 95 percent new with only a few fasteners and bolts carrying over from the first-generation model. That’s significant because it means consumers get a new small crossover with impressive upgrades.

It isn’t just the outside sheetmetal that’s new, although it gets Subaru’s new design language, it’s what’s underneath the new skin that has also been totally transformed. Torque News has written a lot about the new Subaru Global Platform the new 2018 Crosstrek rides on. We got to experience the difference it makes first hand at the event.

The key to the Crosstrek’s transformation is the new Subaru Global Platform with improved rigidity, that enhances NVH (Noise, Vibration and Harshness), handling and safety. Subaru engineers increased the use of higher strength steel to pull off the improvements.

The media event was held at Dick’s Sporting Goods Park where the Colorado Rapids professional soccer teams plays. Dominick Infante, Subaru of America National Manager of Product Communications, brought in a team that transformed the parking lot into a mini test course for the media to get a feel for the new Crosstrek. During the event we were able to experience Crosstrek’s improvements that translates to quicker, more responsive steering and stability and we felt it on the course.

Crosstrek also gets a new suspension with the rear stabilizer now attached directly to the body that reduces body roll by 50 percent over the outgoing model. As we pushed the Crosstrek hard down a runway, we had to dodge a water spray shooting up from the ground and then immediately steer around another jet stream. The new Crosstrek had minimal body lean and the steering was quick and responsive. We hit the brakes hard to avoid the upcoming cones and could feel the crossover’s improved stopping performance.

We also experience the Crosstrek’s new X-Mode designed to enhance the Crosstrek’s capability in low-friction environments. The course included a steep ramp that was also wet with the rain falling. We drove the vehicle up the ramp, stopped at the top, pushed the X-Mode button and let the crossover roll down the steep decline without touching the brakes. While most buyers won’t take their vehicles off-road, Todd Hill says, 33 percent of Crosstrek owners will use it for off-pavement recreation. Crosstrek also comes with 8.7-inches of ground clearance which no competitor exceeds. 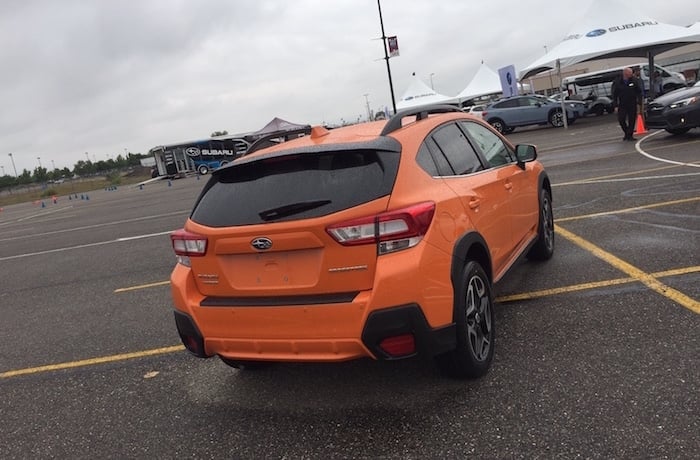 We didn’t get a chance to spend an abundant amount of time inside, but the interior is more spacious because the wheelbase is 1.2-inch longer, and the body is 0.9-inch wider than the previous generation model. Subaru engineers redesigned the rear taillights, and the rear liftgate opening is four inches wider allowing for easier cargo loading and the area behind the rear seat gets larger for greater utility.

The Crosstrek’s FB20 2.0-liter engine has also been radically transformed. The Subaru power plant gets 80 percent new components, it gets a 26lb. reduction in weight, more horsepower and torque, (now 152-hp vs. 148 before) a strengthened block that’s 10 percent lighter, and it’s mounted 10mm lower with a lower center of gravity for improved balance and stability.

Consumers looking for a small crossover, will get an all-wheel-drive vehicle that’s comfortable for the city commute, fuel-efficient, gets enhanced active safety, and is recreation-purposed with a go-anywhere attitude. When you add it all up, the new 2018 Subaru Crosstrek doesn’t just get a remodel, it received a radical transformation.