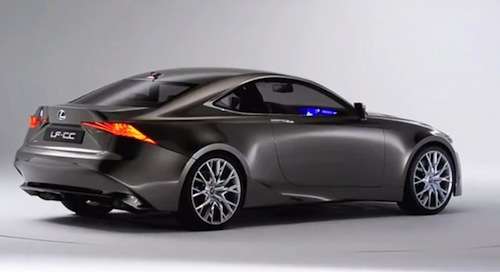 The Lexus LF-CC concept car has been completely revealed in a new video and gives us the best look yet at a preview of the 2014 Lexus IS coupe.
Advertisement

Lexus revealed the LF-CC concept car in some spectacular images yesterday just ahead of its debut at the 20i2 Paris Auto Show. But now we can show you every detail of the car that is expected to be a preview of the upcoming 2014 Lexus IS. Lexus has released a new video below that shows the LF-CC concept cars beautiful exterior as well as giving us a look at the luxury interior. The future car follows the LF-LC sports coupe concept that was unveiled at the Detroit Auto Show earlier this year.

Lexus insiders say the LF-LC Concept will certainly become a production model within the next three years. This will give Toyota CEO Akio Toyoda the sports car he needs to compete with his German rivals. Both the LF-LC and the LF-CC concept cars are a departure from the brands conservative image. These cars will help Lexus transform the luxury brands image into a force to compete with both BMW, Audi and Mercedes-Benz.

Lexus is making a move to compete with the Germans who have outpaced the rest of the automotive world with their luxury performance cars. BMW, Mercedes-Benz, Audi and Porsche are all having record sales with their performance and luxury cars in 2012 and are forecasting even better sales for 2013.

The new 2014 Lexus IS will certainly take its styling cues from the new LF-CC and it will it compete with the German leaders. Currently, the Lexus IS trails the BMW 3-Series, Mercedes-Benz C-Class and Audi's A4 in the sales race. The new 2014 Lexus IS will be offered in a new coupe variant along the same lines as the LF-CC concept being unveiled in Paris later this month. Competition is always good and it is driving Lexus to bring out cars that not only are luxurious, but are also sporty and will have supercar status. The Lexus IS will be getting some revolutionary changes with new exterior styling, a new interior and all-new drivetrains.

The 2014 IS will have a “wider, more aggressive stance, a sleeker profile and the most radical iteration of the company's new ''spindle'' grille to date.” We are definitely getting a good preview of the 2014 IS ahead of its official launch. The radical new design and a sporty coupe should compete well as Lexus tries to keep up with the Germans. Peter Evans, the corporate marketing manager at Lexus Australia, said, “The Japanese luxury brand couldn't afford a gentle evolution of its popular IS midsize sedan. When you're a challenger brand and you're No.4 in sales, you can't afford to be evolutionary.''

Toyota CEO Akio Toyoda is keeping a close eye on the success that both BMW and Mercedes-Benz have had with their luxury performance sports cars, and he knows he must do the same thing with the 2014 Lexus IS in order to stay in the race. Take a good look at the Lexus LF-CC in the video below and look at the future of the Lexus brand.

Revolutionary changes coming to Lexus starting with the 2014 IS 250

Lexus competes with German rivals by bringing LF-LC to production

John Goreham wrote on September 18, 2012 - 10:22pm Permalink
Good scoop Dennis I just hope "All new Drivetrain" doesn't mean weak and underpowered. It will be hard to go backwards from the 306hp in the IS350 line. The 250 is an embaressment. Wanna bet they kill the IS-F with the V8? Wanna bet they pretend a V6 with an electric motor is just as good?
Neil wrote on September 21, 2012 - 5:15am Permalink
Please Lexus give the UK your 350 version of the wonderful V6 and not the unfulfilling 250 that we have at present in the IS. You can have a huge slice of the German cake if you give us more power combined with your wonderful Hybrid economy, but NEVER let the quality and reliability slip as others have done as this is what makes your brand in my opinion No 1. Fantastic looking car, i want one now!