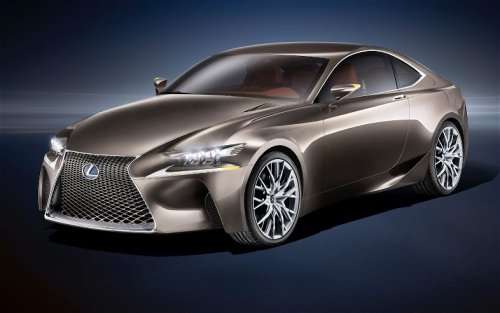 Lexus drops photos and a few details on the new LF-CC, a compact version of the show-stopping LF-LC concept shown just a few months ago. The car shows the clear design trend that Lexus will be adopting in the near future.
Advertisement

Toyota's premium brand, Lexus, is working to change its face and is doing so with new concept cars geared towards creating excitement. When the concept LF-LC debuted early this year, it hit the press like a tsunami, wowing even some of the most skeptical of journalists. Most assumed it was a one-off concept and a fluke.

At the Paris Motor Show, opening in a few days, Lexus will debut another concept titled the LF-CC. A compact takeoff of the earlier LF-LC, the CC has the same bold styling cues, but in a smaller package. That isn't to say it's a direct copy of the larger show-stopper, though. The LF-CC has a more refined look than its predecessor. Indeed, a more production-ready look, you might say. Speculation is that it could be the design cue for the upcoming IS next year.

Whatever it becomes, it's a striking display of automotive prowess. The lines are distinctly sport coupe, with the long, saloon-like hood - reminiscent of some of Europe's most endearing sport sloops - and the low roofline that cuts abruptly at the rear in a classic clipped fastback. It also looks decidedly rear-wheel drive, given those proportions.

Toyota hasn't said whether it will be, but it will definitely include a hybrid version as its primary mover with probable gasoline-only options as well. The car will compete directly with staples of the luxury compact market like the BMW 3-series and Mercedes-Benz C-class. The powertrain, unlike those, will rest on a 2.5-liter four-cylinder Atkinson cycle DFI engine as part of the overall hybrid system built not for economy, but as a power/torque boosting setup similar to that in the LF-LC.

Other engine options would likely include the same 2.5L as above without the hybrid components (perhaps in a base model) and a larger 3.5-liter V6. Both of these engines appear in the current IS 350. The IS F also has a large 5.0L V8 here in the U.S. that could possibly be used in the CC as well.

In production, expect the extremes of the front grille and curtains to be muted and the deep lines in the hood and near the D pillars to mellow. In the accompanying photo gallery, you'll see the strong stance and flow of this car, something that's been missing from Lexus models in recent memory. That is, hopefully, what the brand plans to continue with in its design path.