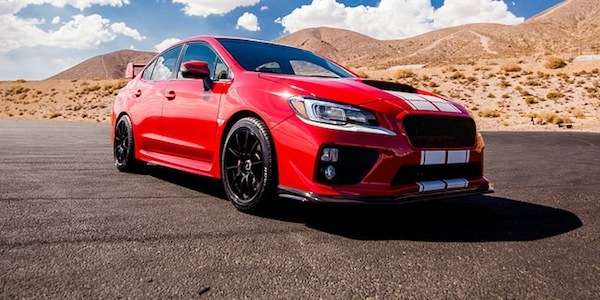 The ESX STI will only be available for a short time, and only 25 cars will be built by ESX Motorsports. These high-performance 2015 Subaru WRX STIs will be available on either coast in the U.S., will have very limited dealer availability and they are arriving now.

Each ESX STI is hand-crafted and will be numbered for authenticity and exclusivity. How much is the new ESX STI? One east coast dealer has the new ESX STI listed for sale at $63,998 and will ship it anywhere in the U.S. for that price. For more information on the special edition 2015 Subaru WRX STIs from ESX Motorsports, go to ESX Productions or contact one the Subaru dealers listed above.

Parks McCants wrote on January 2, 2015 - 8:44pm Permalink
Well now... That looks like a kick in the a... Thanks for sharing. Happy New Year to ya.
btao wrote on January 6, 2015 - 8:06am Permalink
That is the most pointless, overpriced piece of candy I've ever seen. OOooo, big deal, it's "limited edition." WRX and STi owners like myself create our own "limited edition" cars by picking and building things ourselves or with the help of local and international experts for a fraction of the cost, which is why everyone loves these Subarus. Every single owner and Subaru employee mocks and cracks jokes all day long about that ESX. There's no way on the planet that thing is worth twice the price of a showroom STi, with at best 450hp? Seriously? You can spend 1500-2000 and bolt on parts safely in your garage and get the same output. I've seen it in person at Center Subaru, and sure, it's nice, but I've seen a lot that are a lot better. From what I can tell, they didn't even repaint the whole car to do the racing stripes, so it's not like you are paying for a 10k paint job on a hot rod. They just cleared over the stock red after the vinyl stripes were applied. Fancy seat covers? They are still the stock seats. Normal Konig wheels with a $50 center cap. Have someone paint your calipers for $150. Fancy intercooler? Nope, stock with painted logo. Is that rust in the exhaust? Nice weld job. Bolt on seat belt bar? Ballin. The pictures on their website are showcasing a simply great car that went largely untouched except for a few stickers and window dressing. A cold air intake, Cobb Accessport and exhaust are standard fare for anyone buying one and that's the only performance enhancements you get for 30,000? I guess you had to pay for those expensive models for your ad...