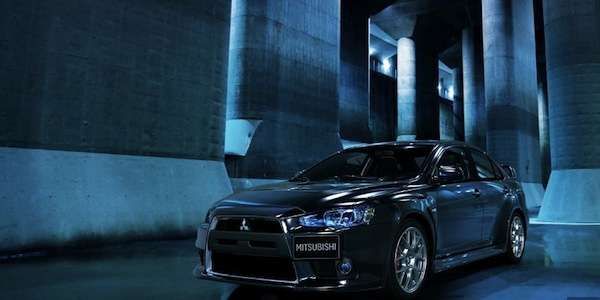 Mitsubishi has announced the Tokyo Auto Salon lineup and it includes the last evolutionary street model of the high-performance 4WD sedan. The Japanese automaker is calling it the Lancer Evolution X Final Concept, but this car is not just a concept and it will reach production and could be in U.S. showrooms next summer.

In an interview with Motor Trend at the Los Angeles Auto Show, Don Swearingen, Executive VP of Mitsubishi Motors North America, confirmed that a new Special Edition 2015 Mitsubishi Lancer Evolution will arrive next year. Mitsubishi will send off the the 2015 Lancer Evolution in a big way with more power to reward performance fans here in the U.S. Mitsubishi will likely limit production to 2,000-2,500 units of the higher performance sedan and they will be built during the final six month’s of production that will end next year.

What Mitsubishi is bringing to the Tokyo Auto Salon next month is a Lancer Evolution X Final Concept that could be the model that will be shipped to the U.S. The EVO X that the Japanese automaker is bringing to the show is a “street model” and will make it to production according to Mitsubishi. And it’s coming with a lot more power than the standard 2015 Lancer Evolution.

The new 2015 Lancer Evolution X Final Edition will feature a 2.0-liter turbocharged engine that will be pumping out a massive 473 hp (480PS) and will be equipped with a HKS turbocharger, special high-performance intake system, exhaust system, fuel delivery system, cooling system and Engine Control Unit (ECU) all upgraded and tuned by HKS who is one of the best known aftermarket brands in the world. Everything HKS manufactures, is tuned to surpass the OEM equipment. And they have succeeded in a big way.

Special features inside and out

CHECK OUT: Mitsubishi Lancer Evolution Special Edition coming to the U.S. in 2015

Outside, the new Evolution X Final Edition will feature one color, a matte black exterior paint finish with accenting gloss black roof and rear spoiler. The front of the Final EXO will feature a dark chrome-plated front grille and the interior will come with sporty Ashiraimashita red stitching on the seats.

Mitsubishi has not released pricing on the new 2015 Lancer Evolution X Final Edition and have not said whether the U.S. model will get the same 473hp HKS-equipped drivetrain that they will be bringing to the Tokyo Auto Salon next month. Stay tuned.

Tirth Gandhi wrote on January 1, 2015 - 1:01pm Permalink
I don't see this going well cause they are probably going to charge around 50-55K for the car and I don't see anyone but the collectors buying the car.
Brandon Green wrote on January 8, 2015 - 8:10pm Permalink
not to hate on you Tirth but the new stingray edition is $50,000 and it gets half of the gas mileage is the Evo X and the exact same amount of horsepower plus there is a ton of people that are already to buy it even if it's not 473 horsepower
Sombath Sun wrote on January 11, 2015 - 10:24pm Permalink
Bring it Mitsu! This has to go for $60k. I have a family and my wife don't mind me driving the Evo around, but for that price, rather get a used GTR or Lotus Evora.
Furkan Arık wrote on January 18, 2015 - 11:32am Permalink
Hey everyone im from Turkey and i have evo x mr sst.I would like to ask something about final edition . I wanna buy evo x 215. Does anyone know is that real ? Or is that really 473 hp ? Please contact me my mail is [email protected] I really need a information about this .
Sombath Sun wrote on January 19, 2015 - 4:45pm Permalink
What you read, is what you get here. No further details until car actually comes out? If you're from Turkey, can you just buy the FQ? I am actually suprised Mitsu is doing, with 2000 units? They barely sale here in the U.S.
PL wrote on May 5, 2015 - 10:23am Permalink
If you are from Turkey all you need is a donkey, just hang a sign saying "Evo X Special Edition" around it's neck and you are all set! :-)
Tim wrote on January 23, 2015 - 11:48pm Permalink
Wow!! This is wonderful but I just traded in my 2011 Evo x for the 2014 Evo x model, I spoke with the Mits dealer and its true its gonna hit the us soon. Now I wish I can get it but I know it will be up there in price. Go Mitsubishi!! Go out with a big BANG!!!
Masato wrote on April 3, 2015 - 6:30am Permalink
The best EVo is ix MR ever! Since EVO X released the history of evo is end. I purchased EVO IX with 40000km and tuned up to 780hp. It weighs only 950 kg as all replaced with carbon fibre, titinum and aluminum partly. Even car roof, frame, wheel and everything. taking only 2.3 sec 0-100 km/h. No quicker than this car on Aussie road!