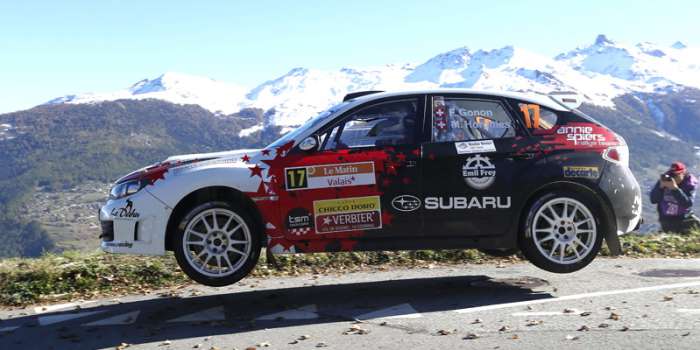 Mark Higgins who set the record at Isle of Man driving the 2015 Subaru WRX STI, came close to a victory at ERC round 10. This time he did it in Switzerland.
Advertisement

Mark Higgins wasn’t driving the 2015 Subaru WRX STI at Round 10 of the FIA European Rally Championship (ERC), but he came close to winning again. In this ERC rally, British driver Mark Higgins and co-driver Carl Williamson appeared for the second time this year in their Group N 4-door type 2014 Subaru WRX STI (GVB). Round 10 of Rallye International du Valais took place on tarmac roads in and around the Valais region close to Lake Geneva in southwestern Switzerland.

Higgins almost pulled off a victory in Switzerland

Higgins jumps out to an early lead

Higgins and Williamson clocked the fastest time on 2 of the first 3 stages to take the early lead in the Production Cup category, but they were forced to retire on the first stage of Day 2 due to a transmission problem. After their misfortune, Gonon and Horgnies took the lead and dominated the rally with 17 out of 19 stage wins to claim victory of the Production Cup category with more than a 6.5 minute gap over the rest of the field.

Hunziker and Wahl finished second to make a Subaru one-two finish in the category. This year marked the 55th anniversary of this rally, and it ranks as the most important event in the Swiss motor sporting world. The rally takes place on asphalt stages in the Alps, and this year saw snow-capped peaks and frozen sections at high altitudes on the challenging stages.

The event got underway in Sion, the regions capital, with a practice and qualifying session followed by 3 stages. On the next day, 8 stages -2 loops of 4 stages were run, and Day 3, the final day featured 8 stages: 2 loops of 3 stages and 2 more including one of the longest ones of the season at 32.13 km. The drivers race a total rally distance of 260.20km.

Mark Higgins wasn’t driving the 2015 Subaru WRX STI at Round 10 of the FIA European Rally Championship (ERC), but he came close to winning Round 10 of Rallye International du Valais in their Group N 4-door type 2014 Subaru WRX STI. If not for a mechanical problem, they were in a good position to win. But Subaru dominated the Production Cup category with a one-two podium finish.