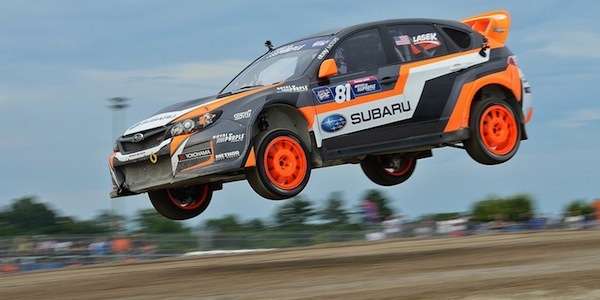 Bucky Lasek says he will spend more time in his new Subaru WRX STI GRC car than on a skateboard. Can he contend for Subaru’s first GRC championship?
Advertisement

This was Bucky Lasek’s third season driving the Subaru WRX STI and he entered with high hopes for a career year. Lasek drove his Subaru STI Global Rallycross car to 3 podiums in the 2014 season and expects to contend for Subaru's first GRC championship in 2015. Here’s a recap of his success in GRC 2014, and in an interview with Subaru Motorsports, he tells them he’ll spend more time in his WRX STI GRC car than on his skateboard.

At X Games Austin, Lasek beat teammate Travis Pastrana for the final transfer spot to the main event. Lasek produced a stellar drive with a beaten-up car to earn a second place finish. It was his first Red Bull GRC podium, and it was also his first of 20 X Games medals to come in rallycross, making him one of only two athletes to have earned medals in both motorized and non-motorized sports.

The next month in Daytona, Lasek’s #81 Subaru WRX STI was back in command, as Lasek held off numerous championship contenders and finished in third place, his second podium of the year, alongside Rhys Millen and Ken Block.

In the final race of the season in Las Vegas, Lasek muscled past Scott Speed in the semifinal, Lasek overcame heavy contact from Speed in the first start of the main event to reclaim a podium spot on the restart and finished on the podium with a third place finish. With three podium finishes in 2014, Lasek was Subaru’s most prolific podium finisher this season. Isachsen finished with two podiums, a first place in Seattle and a second place in Charlotte.

In an interview with Subaru Motorsports, Lasek tells them what he expects to accomplish in 2015. Subaru asked Lasek, “As a driver, what is going to be your focus for next year, and what do you hope to accomplish on the GRC circuit in 2015?” Lasek told them, “Next year I'm focusing on racing full time with skateboarding taking the backseat. I plan on fighting for wins as a racer and fighting for Subaru's first GRC championship.”

Vermont SportsCar will be preparing the STI GRC cars again next year and it looks like fans will see the new 2015 Subaru WRX STI on the track for the first time. Vermont SportsCar will have the cars ready, and if Lasek spends more time in the seat of his #81 2015 STI GRC race car than on his skateboard, maybe he really will contend for Subaru’s first GRC championship in 2015. Stay tuned.

Tesla Contemplates A New Strategy for China Retail even As Sales Boom
Jay Leno on Elon Musk & EVs: “I Think He Should Get ... Credit"
END_OF_DOCUMENT_TOKEN_TO_BE_REPLACED